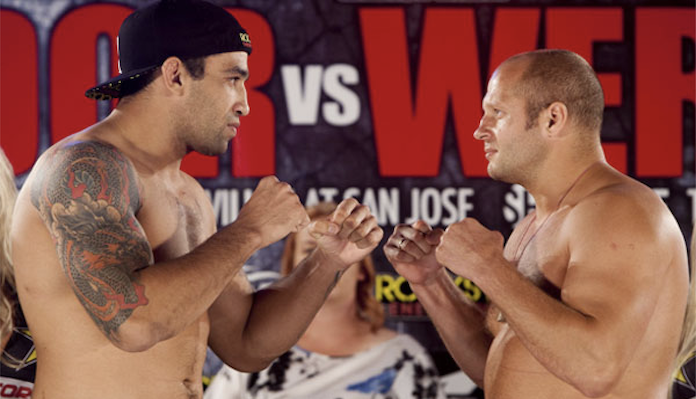 It was just over 11 years ago in Strikeforce that Werdum and Emelianenko met inside the cage and the Brazilian pulled off one of the biggest upsets of all time when he tapped the Russian out with a triangle-armbar. Fans have always wanted to see a rematch between these two rivals, but it has never happened. With Emelianenko set to return to the Bellator cage later this year in Russia, Bellator president Scott Coker has admitted that a number of big names have been in touch with his company to fight Emelianenko, naming fighters such as Josh Barnett, Junior dos Santos, and Alistair Overeem among the possibilities.

In addition to those fighters that Coker mentioned, there is another possible opponent for Emelianenko in the form of Werdum, who is currently signed to the PFL. Werdum fought to a No Contest with Renan Ferreira in the PFL but had to withdraw from the heavyweight tournament due to an injury. With Werdum no longer eligible to win the $1 million grand prize in the PFL cage, he now has his eyes set on fighting against Emelianenko in Russia.

Taking to his social media, Werdum openly challenged Emelianenko and said that he would welcome a matchup against the legend in Russia in order prove who the GOAT truly is.

It will be interesting to see if Werdum lands this rematch with Emelianenko. Given that he’s currently under contract with PFL, it seems like a long shot, but if he is able to get out of his PFL deal and sign with Bellator, then perhaps we will see these two rivals fight again.

Do you want to see the rematch between Fedor Emelianenko and Fabricio Werdum?