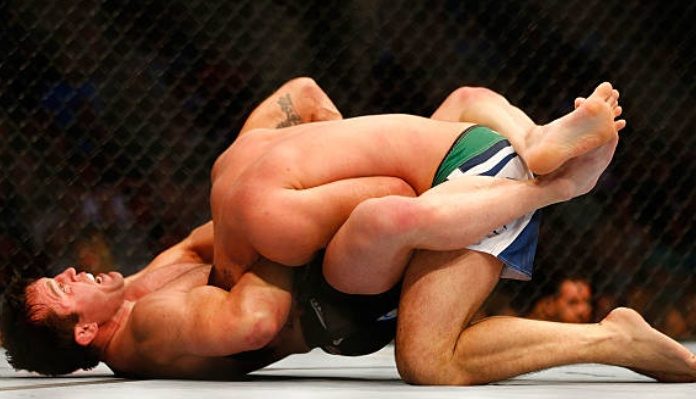 If someone would have told you eight to nine years ago that the then top UFC middleweight contender Chael Sonnen would one day be an official Brazilian Jiu-Jitsu black belt, you probably wouldn’t have believed them.

Yet here we are!

For around those eight to nine years or so, “The American Gangster” has been training under the wing of the legendary BJJ master and former MMA fighter, Fabiano Scherner at Gracie-Barra Portland.

Congratulations to ADCC superfight winner @ChaelSonnen for his promotion to black belt! pic.twitter.com/tUgPbQY2W9

At a time, specifically after his first encounter with Anderson Silva in his first career UFC title shot, Chael Sonnen was quite vocal about how “cowardly” of a fighting art that BJJ was as. But the past is the past, folks.

Since then, Sonnen has continually worked on and honed his BJJ skills (obviously) and found love for the art. So much so that he has found himself competing in several BJJ competitions over the years as well as even starting his own promotion in Submission Underground grappling.

Of course, Chael Sonnen has remained a fixture in the MMA community as he’s fought for the UFC title on three separate occasions, twice at middleweight and once at light heavyweight.

Following his UFC career, he found his way to Bellator where he would finally settle the score with his longtime rival Wanderlei Silva before participating in the Bellator heavyweight Grand Prix (his first time competing in the division).

The proud Oregonian has also been a consistent voice as an analyst as well as a commentator for the World Series of Fighting and Bellator.

In the end, Sonnen has left his mark in the MMA world and achieved a status that not many would have ever expected him to.