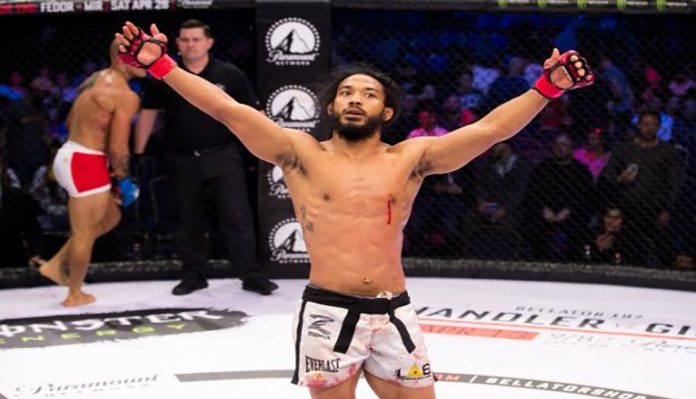 Former UFC lightweight champion Benson Henderson is set to return to the welterweight division when he fights Jason Jackson at Bellator 253.

Bellator 253 takes place on Thursday, November 19 at Mohegan Sun Arena in Uncasville, Connecticut. Henderson vs. Jackson is set to be the co-main event for the card, which features a five-round main event between featherweights AJ McKee and Darrion Caldwell. Also on the card is Keith Lee (brother of UFC star Kevin Lee) vs. top prospect Raufeon Stots, plus the return of Kevin Ferguson Jr. (son of the late Kimbo Slice).

Jackson himself was the one to first break the word of the short-notice fight, revealing the matchup against Henderson and a poster for the fight in a post on his Instagram.

Next week it’s #Rastatime JAH works in mysterious ways, so Hear me while I call on you and help me to conquer cause without your help I know I’ll suffer. #TAKM @bellatormma

Henderson (28-9) had a four-fight win streak snapped with a KO loss to new UFC fighter Michael Chandler back in August. Since joining Bellator in 2016, Henderson has a 5-4 overall record with a notable win over current Bellator double champ Patricio Pitbull. At age 36, the weight cut down to 155lbs is not getting any easier for the former UFC champion Henderson, and he’s moving up to welterweight to see if it’s a better fit.

Jackson (12-4) is one of the hottest welterweights in Bellator. He is coming off of back-to-back decision wins over former UFC fighters Jordan Mein and Kiichi Kunimoto. Overall, Jackson has won five of his last six fights. He is a former Dana White’s Contender Series alum who was passed over by the UFC. However, he has turned into a great find for Bellator and a win here for Henderson could earn him a Bellator welterweight title shot.

Who do you think wins, Benson Henderson or Jason Jackson?