Bellator women’s featherweight champion Cris Cyborg will make her return to the boxing ring next month.

The Brazilian has been out of the cage since her rematch with Arlene Blencowe in April. In the main event of Bellator 279, ‘Angerfist’ put forth a great fight, and showed a lot of heart. However, Cyborg retained her title after five hard-fought rounds.

Following that win, the women’s featherweight champion became a free agent. While she showed interest in returning to Bellator, she was also reportedly in talks with the PFL. Kayla Harrison and Cyborg have famously gone back and forth on several occasions over the last year.

Instead, Cris Cyborg has decided to head down the boxing lane. In September, she made her debut against Simone Silva in Brazil. In the eight-round contest, Cyborg showcased her power and speed, ultimately outboxing the veteran en route to a decision win. 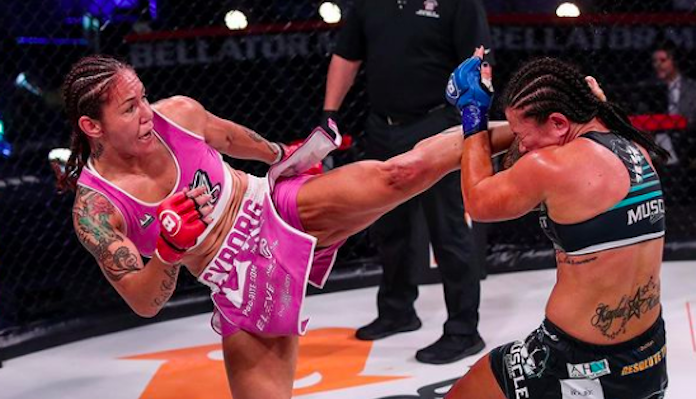 Since then, Bellator President Scott Coker has voiced optimism in re-signing his champion. While Cyborg still might return to the mixed-martial-arts promotion, we know she won’t be fighting in the cage next. Instead, the former UFC champion will be making her U.S. boxing debut.

Cris Cyborg will face fellow Bellator veteran Gabrielle Holloway on December 10th in Omaha, Nebraska. The bout will be on pay-per-view and be on the undercard of Terence Crawford’s return against David Avanesyan. The card will be broadcast by the upstart promoter, BLK Prime.

Like the Brazilian, Holloway is still a relative newcomer to the boxing scene. She’s currently sitting at 0-2 as a pro but has a lengthy career in MMA as well. A former Bellator veteran, she’s faced names such as Cat Zingano, Julia Budd, and Alexis Dufresne.

Are you excited about Cris Cyborg’s boxing return? Will you watch the fight? Sound off in the comment section below PENN Nation!

This article appeared first on BJPENN.COM
Previous articleAnthony Smith reflects on loss to Jon Jones, believes former champion is very beatable: “He’s not that good”
Next articleBrendan Schaub hoping the UFC books Alex Pereira vs. Khamzat Chimaev next: “Khamzat would be a handful for him”
© Newspaper WordPress Theme by TagDiv