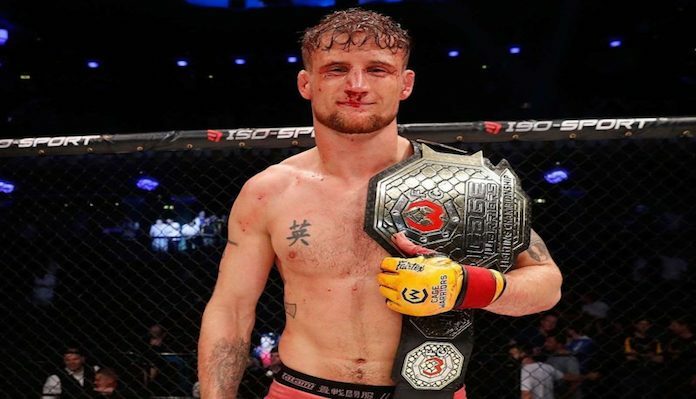 Houston recently became a free agent when he agreed to a mutual release from Cage Warriors. He immediately began negotiating with other MMA promotions, and it appears that Bellator was the organization that won the Houston sweepstakes.

According to Bellator’s Head of Europe David Green, the promotion has signed Houston an exclusive deal. MMA journalist Jake Jones had the news via Twitter.

Just speaking to David Green, the Head of Bellator Europe.

He has announced @BellatorMMA’s signature of the one and only @HitmanHouston90.

What a signing – very exciting things to come. Maybe a Glasgow Card?👌🏻#MMATwitter pic.twitter.com/UuOH52Oz6g

“Just speaking to David Green, the Head of Bellator Europe. He has announced @BellatorMMA ’s signature of the one and only @HitmanHouston90 . What a signing – very exciting things to come. Maybe a Glasgow Card? #MMATwitter”

This is a very exciting signing by Bellator as Houston is one of the most popular fighters in Europe, where Bellator holds many events these days.

Houston (8-0, 1 NC) won the first eight fights of his MMA career and won the Cage Warriors welterweight title with a split decision win over Stefano Paterno in October 2018. He only defended his title once, when he fought Nicolas Dalby in a bloody battle in June 2019 that ended in a No Contest because there was too much blood on the canvas and the fighters kept slipping on the mat.

As soon as Houston became a free agent he was already being courted by numerous organizations, but Bellator needed him the most. A Scottish-based fighter, Houston has everything it takes to be a star in the sport, and with Bellator holding events in Europe all the time, Houston will be given every opportunity to become a major star for the promotion. He is the perfect headliner for the Bellator European Series events, and if he can do well there, perhaps Bellator will take him stateside at some point.

Who should Ross Houston fight in his Bellator debut?