The bout will serve as a rematch as Cyborg and Blencowe previously met in October of 2020. That evening at Bellator 249, it was Justino emerging victorious by way of second round submission.

Since their original encounter, Cris Cyborg (25-2 MMA) has gone 2-0, scoring knockout wins over Leslie Smith and Sinead Kavanagh to defend her title.

Meanwhile, Arlene Blencowe (15-8 MMA) has also gone 2-0 since suffering her defeat to Cyborg eighteen months ago. ‘Angerfist’ scored a TKO victory over Dayana Silva at Bellator 262 and followed that up with a decision win over Pam Sorenson this past November. 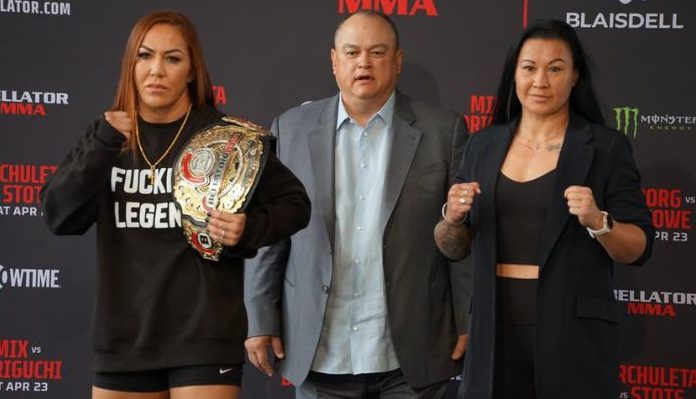 Round one of the Bellator 279 main event begins and Cris Cyborg quickly gets to work with her left hand. Arlene Blencowe attempts a double jab but the punches fall short. Cyborg lands a right hand and then a low kick. She swings and misses with a left hook. A hard leg kicks lands for the champion followed by a jab to the body. Justino charges forward with a flurry. Blencowe lands a decent counter right. The fighters come together and Cyborg pushes Arlene up against the cage. Good head control and knees from Cris Cyborg. She switches to punches but Arlene Blencowe is able to escape the position and circle out. Cyborg comes forward and lands a high kick. Blencowe answers with a big right. Cyborg responds with a straight right and Arlene is down. The champ jumps on her with ground and pound. She moves to her back and lands a knee. That strike was to the head and Arlene was grounded. The fight is stopped so that Blencowe can hopefully recover. She does and we restart. Big shots right away from Cyborg. She lands a head kick but her opponent is still standing. Blencowe with a right hand now. The horn sounds to end round one.

The power of @criscyborg – pic.twitter.com/Dyk0LSjgnF

Round two of the Bellator 279 main event begins and Cris Cyborg is immediately back to pressuring her opponent. She lands a good combination followed by a low kick. Another combination that ends with a crisp right hand. Arlene Blencowe fires back but she just doesn’t seem to have much for the champion at this point. Cyborg forces her up against the cage and begins landing knees from the clinch. The fighters break free from the cage and begin trading big punches. Blencowe lands a nice right and Cyborg smiles. More big punches from the pocket by both ladies. The horn sounds to end round two.

Round three of the Bellator 279 main event begins and this time it is Arlene Blencowe coming forward with early pressure. Cruis Cyborg keeps her at bay with a low kick. She lands another. Blencowe with a straight right hand over the top. She lands another. Cyborg fires back with a kick to the body. She just misses with a front kick to the face. Blencowe counters with a left hook and Justino is forced to a knee. She gets right back up and partially lands a front kick. More big shots from both ladies. Blencowe is bleeding badly now from the cut she has over her right eye. Another kick lands for Cyborg before the horn sounds to end round three.

Round four of the Bellator 279 main event begins and Arlene Blencowe was fired up in her corner between rounds. She comes forward quickly and lands a big combination that ends in a right hand. Cris Cyborg fires back with a big left but the challenger eats it and lands another big right. The tide feels like it could be turning here. Arlene with another big punch that for a second time sends Cris down to one knee. She pops right back up and charges forward. A big takedown now from the champion. She winds up in side control and has two minutes to work. Blencowe is scrambling hard in an attempt to stand back up but Cyborg won’t let her. Another good scramble attempt from Arlene and this time she gets back to her feet. The crowd cheers as she throws a jab to the body of Cyborg. The champion answers with a crisp left jab and then a low kick. Blencowe comes forward with a nice combination. The horn sounds to end round four.

The fifth and final round of the Bellator 279 main event begins and Arlene Blencowe once again comes out quickly. She almost certainly needs a finish but given the previous four rounds it is certainly not out of the question. Cris Cyborg attempts to keep her at bay with a body kick. She follows that up with a straight right that lands flush. Blencowe attempts a kick but gets countered beautifully by Cyborg. The challenger continues to press forward and finds a home for a left hook. Cris responds with a right hand but Blencowe replies with a low kick. Another right hand from Cyborg appears to stun Blencowe. The Aussie is ok and lands a nice left. Just over a minute remains. Cyborg with a nice jab. Blencowe points to the center of the cage and Cris meets her there. Justino with a pair of jabs. Blencowe misses with a right hand. Another jab from the champion. She lands a right hand as Arlene attempts to get inside. The horn sounds to end a great fight.

Who would you like to see Cyborg fight next following her victory over Blencowe this evening in Hawaii?