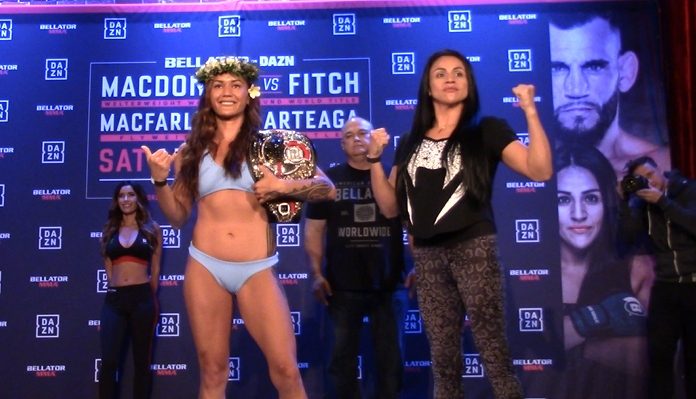 The first of Bellator 220’s two title fights went down within the always fun flyweight division as the undefeated champ, Ilima-Lei Macfarlane took on the hungry challenger, Veta Arteaga.

Arteaga pushes the action instantly but Macfarlane stops the forward momentum with a single leg attempt that takes them to the cage. Arteaga tries to land what she can in tight but Macfarlane eventually gets the action down before Arteaga finds a sprawl to better her position and get back up. Against the fence again they go. Macfarlane pulls her away and gets the takedown. She’s now on Arteaga’s back but gets thrown off fairly quickly. Now working from the bottom, an armbar turns to an ankle lock attempt with Arteaga throwing body punches the whole time. Arteaga stands up with Macfarlane still on her leg. Macfarlane lets go, up to the feet they go. Arteaga continues to be relentless with her attack. She gets Macfarlane to the cage now where she lands knees to the body. The two break and stand in the center. Round ends after Arteaga stops a takedown.

Round two sees an aggressive Arteaga to start once again. Macfarlane brings her in leading to another clinch battle with a takedown following. Macfarlane controls from guard mixing in punches for the majority of the second minute. They end up back on the feet with two minutes remaining. A knee lands from Arteaga. They each land solid punches. Macfarlane starts to pressure forward and hit her jab. Arteaga lands a good right as they both come forward. Leg kick by Macfarlane. Hard right hand from Arteaga lands before Arteaga counters back with a flurry directly before the bell sounds.

Hard right from Macfarlane lands before she grabs the clinch to land a knee and uppercut then pushes Arteaga to the cage working for a leg. She brings Arteaga down to one knee then pulls her around, falling into guard. Macfarlane throws an elbow and Arteaga tries for an armbar but Macfarlane is onto it quick. They end up on their feet, Macfarlane closes the distance but they get separated as a nasty cut is revealed on Arteaga’s forehead from that elbow. Fight is over.