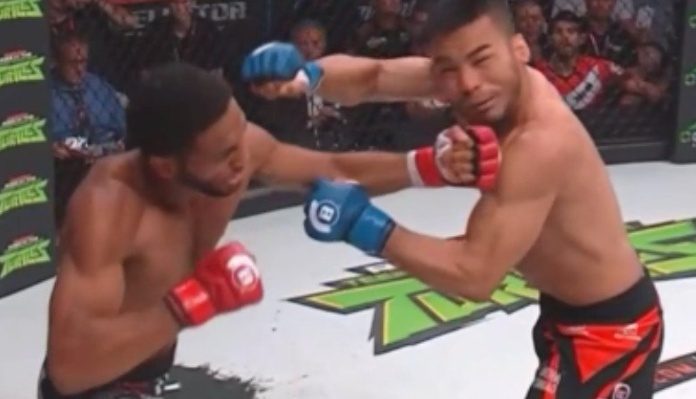 One week away from their monstrous Bellator 206 event in San Jose, California, Bellator delivered with Bellator 205 to get us ready for what’s right around the corner.

The best cards often end up being the ones that go overlooked or unnoticed. That can definitely be said about Bellator 205.

Kicking things off on the main card was Bellator lightweight staple, one-half of the Pitbull brothers, Patricky “Pitbull” Freire (20-8) who took on Roger Huerta (24-11-1) in his second promotional bout.

The action started out fast and furious as Huerta came to throwdown which gave fans nostalgia of back when he was in his prime and appearing on the cover of Sports Illustrated.

Not living up to his nickname, “El Matador” pushed the pace and was swinging and trading bombs with Pitbull while mixing in some nice kicks to the body. Each landed big shots, but Huerta seemed to get the better of all exchanges before Pitbull took him down at the 20-second mark of the opening round.

In the second, Pitbull adjusted and hurt Huerta bad early as he began to pour it on before crumpling Huerta with a nasty nose breaking right uppercut.

Patricky “Pitbull” knocking out Roger Huerta. my hats off to Huerta for not only stepping in on short notice but bringing the fight to Patricky. #Bellator205 pic.twitter.com/S61Lu9Trdv

In the following action, we saw the return to MMA for the current Bellator flyweight kickboxing champion “Miss Dynamite” Denise Kielholtz (2-2) as she took on the always scrappy Veta Arteaga (5-2).

Arteaga started off by controlling the center of the cage as she usually does, looking to apply pressure with her striking or grappling. Stepping in with her punches early, she got the usually on-point Kielholtz to react somewhat sloppily. Yet she was still effective as she countered Arteaga’s aggression.

As the round went on, Kielholtz’ technique sharpened and she began to land clean shots when Arteaga entered the pocket to brawl or clinch. The style of the fight carried over into the second round but Arteaga looked to get things to the ground more often in the middle frame.

She would find a takedown at a point but wouldn’t keep the Judo black belt kickboxing champ down for long. It didn’t matter though because when in the scramble to her feet, Kielholtz would end up giving up her neck and Arteaga wasn’t letting it go.

Result: Arteaga via submission (guillotine choke) at 4:24 of round two

A technical striking battle in the opening round, it was Salter who would find the better of the in and out exchanges. Each delivered a healthy amount of jabs and leg kicks, but it was Salter who found Lovato’s chin more often than Lovato to Salter’s.

In the second round, it was more of the same until Salter hit a big takedown that found Lovato working for guillotines until the round’s expiration.

The third looked similar to the first but with an added urgency as the fight was presumably tied up on the judge’s scorecards. After a slip from Salter, Lovato would follow him to the ground and that’s where they would stay.

Making his way to Salter’s back with the clock winding down, Lovato unleashed some methodical and accurate ground and pound punches that looked like they could end up stopping the fight.

In the end, it didn’t matter as Lovato softened Salter up enough to where he could find the deep rear-naked-choke to force the tap. 9-0, six submissions now for Lovato (two knockouts).

Result: Lovato Jr. via submission (rear-naked choke) at 4:27 of round three

Heading into the main event, we got some fast action…but it didn’t last long.

23-year old undefeated featherweight star in the making, AJ McKee (12-0) continued to show that he was just that against John Macapa (21-4-2).

The two got to work quickly and threw fairly wildly with unorthodox strikes. Particularly McKee who at one point whipped out a spinning wheel kick that saw the fight’s finish come shortly after.

But it was Macapa who would make the mistake of getting stuck in front of McKee who seemingly got overly aggressive as he pressed forward looking to land. However, Macapa found himself getting clipped with a beautiful left hand out of nowhere.