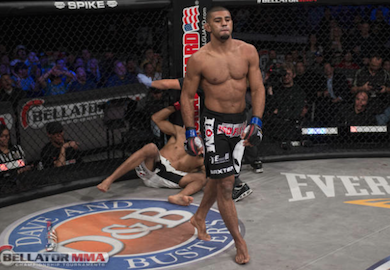 Douglas ‘The Phenom’ Lima is the new Bellator Welterweight Champion.

Rick Hawn came to fight with a specific strategy in mind and that was his eventual downfall. Despite repeatedly getting kicked in the leg, he refused to adapt his gameplan to that of Lima’s and continued to press forward, attacking without checking the leg kicks.

The first significant strike of the fight landed fifty-four seconds into the first round and it was a shin-to-bone leg kick from Douglas Lima. Hawn would continue to absorb leg kick after leg kick throughout the rest of the round without hitting Lima with anything flush. Lima cut off any of Hawn’s striking attempts with his jab which kept him at bay. Hawn’s downfall started toward the end of the first round when he was knocked down twice with leg kicks.

In between rounds one and two, Rick Hawn was instructed by his corner to wrestle and take the fight to the ground. Hawn took the fight to the ground forty seconds in, but not in the way he had intended; Lima dropped him yet again with another harsh leg kick. Lima invited him back up only to drop him with another kick seconds later. This process repeated two more times until Hawn’s corner had seen enough and told the referee to end the fight.

Douglas Lima def. Rick Hawn by way of TKO (Corner Stoppage) 3;19 of Round 2