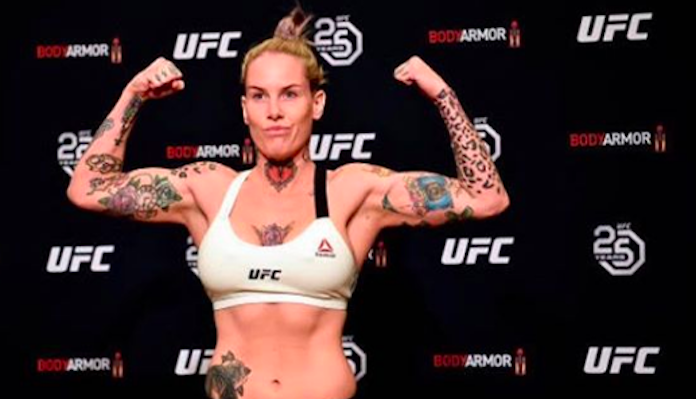 Bellator flyweight fighter Bec Rawlings says her OnlyFans page has been a game-changer during the ongoing coronavirus pandemic.

OnlyFans, for those unfamiliar, is an online subscription service that allows influencers and celebrities to charge for exclusive content. The platform is also used extensively by sex workers.

Rawlings, like many fighters, hasn’t been able to fight as frequently as she intended this year due to the pandemic. Her OnlyFans page has helped her stay afloat during this period of financial strain.

“Look it’s been a game changer for me,” Rawlings told MMA Fighting. “I’d be stressing and freaking out right now. I definitely wouldn’t be in the situation I’m in right now if I didn’t start my OnlyFans. I took the plunge and I’ve never really been one to care about what people think or say. I put myself out there and it’s definitely paid off.

“Normally, I’d be freaking out right now if I haven’t fought yet and made some money. So it’s given me an opportunity to make money elsewhere. So it’s definitely saved me during this. It’s been good. I’m enjoying it. I’ve always been good about putting stuff online and with social media so it’s allowed me to get on a more exclusive website where people can pay to see your content and actually make some money off it instead of putting stuff up on Instagram or Facebook and they reap all the benefits.”

Rawlings hasn’t divulged how much money she makes per month on OnlyFans, but says it’s been a nice source of income for her.

“I’m definitely not Bella Thorne level at all but I’ve made some decent money,” Rawlings said. “It’s definitely been worth it, especially with the criticism that’s come with it like ‘oh this is what MMA has come to’ like we’re stooping to some level and it’s not that at all. It’s your choice what kind of content you put on your profile. I think people just naturally assume the worst.

“Of course when they see other stuff on that kind of site, they assume that’s what we’re posting on there. It’s definitely been worth it. I’ve made some great money on there.”

Rawlings is not the only MMA star to start an OnlyFans account. Several others, such as Jessica Penne, Claudia Gadelha and Cindy Dandois also have. Rawlings sees it as a great tool for fighters to leverage during these uncertain times.

“I think it’s cool to see other fighters and especially athletes embrace the site and hustle on something that we can,” Rawlings said. “We can’t tell the future and with the pandemic, we don’t know when we’re going to fight and so this is a way to set yourself up and have another source of income. It will be interesting to see what kind of content people are offering and if they stick around.

Bec Rawlings last fought at Bellator 240 in February when she defeated Elina Kallionidou by decision. Prior to that, she spent several years competing in bare knuckle fighting under the BKFC banner.