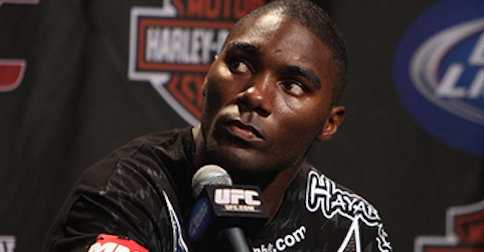 At one point and time, Anthony ‘Rumble’ Johnson had some of the most feared hands in MMA. We haven’t seen Rumble since he lost to Daniel Cormier for the second time at UFC 210 back in April. It was the fight where he announced his retirement from MMA. He hasn’t returned yet, although a big heavyweight match-up could lure him back, but instead he still enjoys the sport from the outside. As the year closes, Johnson sat down and talked about his top three favorite UFC fights of all time.

“The most recent one was Cub Swanson and the little Korean guy [Dooho Choi]. I think they call him ‘Superboy’ or something like that. I was right there front row and those guys were just banging. I was surprised that Cub made it out okay and the little Korean guy made it out okay because they were throwing bombs and hitting each other hard. Just being there and witnessing it up close and personal, that was just amazing to me. Right now, that’s one of my favorite fights. They showed a tremendous amount of heart and both of those guys have my respect.”

Fight of the Night! Fight of the Year?!@CubSwanson is never in a dull fight! pic.twitter.com/BPgDMnRuIG

“My second favorite was my second UFC fight. I think it as at UFC 76. I think it was at Anaheim. It was Jon Fitch versus Diego Sanchez. Buddy, they were going back-and-forth the entire fight. The crowd was just so into it and the sport was fairly new back then, you know what I mean? Just back-and-forth: Submission attempts, after submission attempts, takedowns, everything. They had me up in the nose bleeds. I didn’t care. The fact that I was on that event   I was on that card I was blessed and happy just to be able to look down and see those guys going at it. Two warriors, two soldiers going at it. My third favorite was the first title fight between [Lyoto] Machida and [Mauricio] Shogun in Los Angeles. I was apart of that one two and I had the chance to see two legends fight. I mean, I saw Shogun fight in PRIDE when he was in his prime. Then get to be on the same card as that man and watch him fight was just crazy to me.” — Anthony ‘Rumble’ Johnson speaking to Anatomy of a Fighter.

This list — especially with Swanson’s fight with Choi being included — makes you really think of the possible ‘Fight of the Year’ candidates as we enter 2018. There are just so many scraps to choose from and we still have one card left to close out 2017. While things have been quiet on the Anthony Johnson front lately, the talks of him coming back at heavyweight are still fresh. He could return sometimes in 2018 and put on a favorite fight of his own. Francis Ngannou versus Rumble for the hardest hands in the UFC? Sign us up.