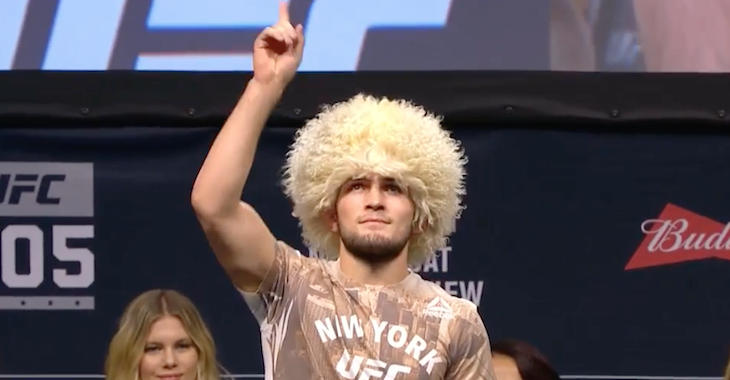 It has been over one year since we have seen Khabib Nurmagomedov compete in the Octagon. The current number 2 UFC ranked lightweight last fought at UFC 205 against Michael Johnson winning with a kimura submission in the third round.

Nurmagomedov was scheduled to fight Tony Ferguson for the interim UFC lightweight title at UFC 209 in March. However, Nurmagomedov was taken to the hospital “due to weight management medical issues” just before the weigh-ins took place and the fight had to be canceled.

Now, with over a year to recover and heal his body, Nurmagomedov is set to take on current number 4 UFC ranked lightweight Edson Barboza at UFC 219, which takes place this weekend in Las Vegas, Nevada.

Nurmagomedov’s head coach, Javier Mendez posted a photo of “The Eagle,” who looks to be in great shape on Tuesday.

Mendez said in the caption of his post, “Weight Check Good💪🏽.”

Khabib Nurmagomedov holds a perfect 24-0 professional mixed martial arts record and has expressed that he wants to get his fight against interim champion Tony Ferguson, which has been in the works and canceled three different times. Edson Barboza holds a 19-4 professional MMA record and is on a three-fight winning streak, last suffering a loss to Tony Ferguson at The Ultimate Fighter 22 Finale back in December 2015.

Who do you see winning the exciting lightweight bout between Khabib Nurmagomedov and Edson Barboza? Let’s get your prediction on how and when the fight ends in the comment section!