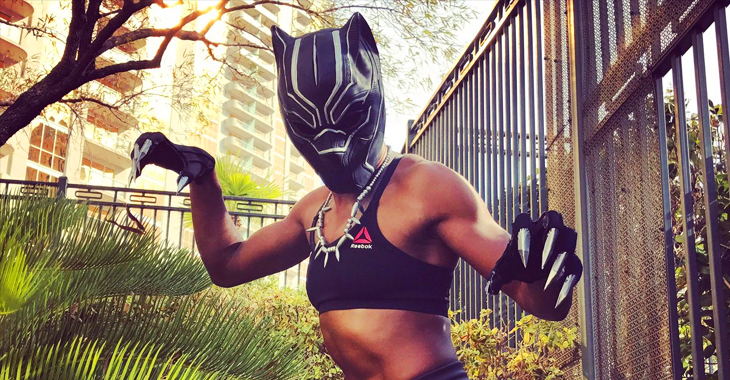 While taking out four fighters in a row and winning the strawweight tritle, Angela Hill’s time in Invicta FC was like a greatest hits of video game and pop culture references. Each weigh-in, she turned up like it was Comic Con and it was awesome. After clawing her way back to the UFC, she picked up right where she left off, laughing on stage as Sagat from the Street Fighter franchise. Her next idea to show up as Marvel’s Black Panther was shot down though, due to the restrictive Reebok outfitting policy.

“I had a whole routine planned out [for the weigh-in with Ashley Yoder]. I was going to do the Jacare crawl to the scale, and just kind of come up like Batman. And be super dramatic with it, and then point at her with my claw gloves and just be really ridiculous, but then when they said I couldn’t do It I said, ‘F-ck it, I’ll just stare at her and look mean. I can’t wait [for Marvel’s Black Panther movie]. It’s going to be so good. It’s going to be great for everyone; for the comic book community and especially for the black community.”

“Afro-futurism is a movement because there’s a demand for it. Black people want to see themselves in the future doing cool things in some kind of fantasy world. And they can go, ‘Oh that’s cool, they look like me and their saving the world, that’s awesome.’ So I think it’s something a ton of people will be excited for. Maybe I’ll see if I can pull something off this time [in my fight with Nina Ansaroff], but it’s not as big of a deal as pulling off a nasty finish. That’s what I really want. Some kind of nasty knockout. I feel like that’s what’s going to skyrocket my popularity — more than any shenanigan I do before the fight. I’ve got my fingers crossed that they see me fighting one day and they give me a call and say, ‘Hey you don’t need to audition, just show up and kick people.” — Angela Hill speaking to Bloody Elbow.

Wasnt allowed to wear my weigh-in costume this time but the hunt is on tomorrow night! #TUF25Finale #BlackPantherCosplay #BlackPantherMovie pic.twitter.com/UnZXhB5yEt

According to the interview with Bloody Elbow, Angela Hill even auditioned for a small part in the Marvel franchise but didn’t get the part. With her creative promotion being thwarted by UFC and Reebok, Hill will look to stand-out by putting in a vicious performance in her upcoming fight with Nina Ansaroff. She’ll continue to carve out a name for herself at UFC Norfolk this Saturday.

Thnx @invictafc for allowing me to show my fans how big of a dork I was 4 times this year #Fallout4 #Dhalsim #AfroSamurai #TheWarriors #TBT pic.twitter.com/p7MztMqpoU