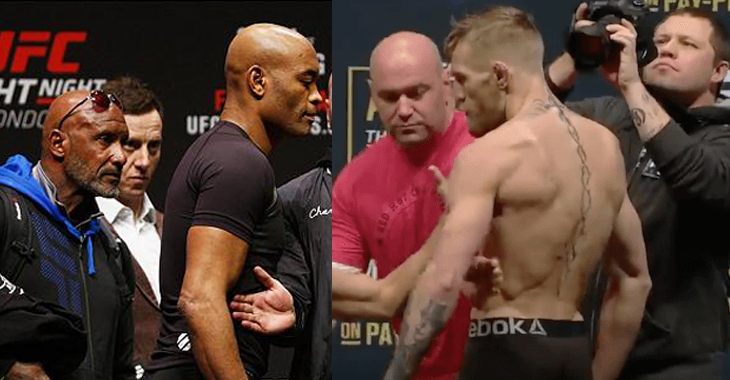 Although technically two weight classes apart as of their last fights, McGregor has fought Nate Diaz twice at welterweight.

Silva, currently ranked #7 in the middleweight division by the UFC, spoke with media in Rio de Janeiro, Brazil ahead of UFC 208, as he is scheduled to take on #8 ranked UFC middleweight Derek Brunson.

“I’d like to test myself against Conor because he’s an interesting martial artist,” Silva said of his desire to fight the Irishman (translated by Guilherme Cruz of MMA Fighting). “His stand-up game is an intelligent game. Not because he’s champion now, but for the martial arts challenge. I’d like to see how these stand-up techniques, his and mine, would mix, and how that would go. But not to fight for a belt or anything like that. For the challenge, an interest, that thing about knowing how a fight like this would go.”

Silva’s last fight was in the light heavyweight division, as he stepped in on two-days notice to take on champion Daniel Cormier in a non-title bout at UFC 200. Although Silva has fought at 185 and 205 in the UFC, the former champion says he would cut more weight for a fight McGregor. “There was no fight booked, we made 174, and master (Rogerio) Camoes said ‘man, you don’t need this, you’re fine, so go back to your division.’ I know I can make 174 now, but my team and my doctor, Marcio Tannure, decided to stay in my division.”

What are your thoughts on a catchweight matchup between Conor McGregor and Anderson Silva? Let us know how you predict this one going in the comment section!