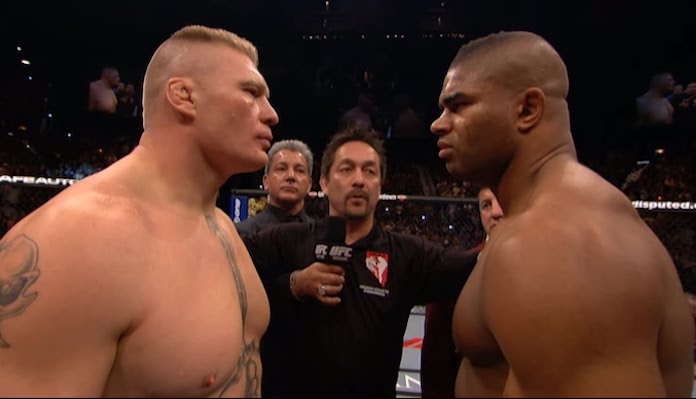 Alistair Overeem doubts that his former opponent Brock Lesnar, who recently became a free agent, will ever return to mixed martial arts.

Overeem, who will take on Augusto Sakai in the main event of UFC Vegas 9 this Saturday night in Las Vegas, doesn’t see it happening.

The former Strikeforce, Dream and K-1 heavyweight champ notes that last time Lesnar fought, he ended up failing a drug test, which sparked a massive lawsuit between his opponent Mark Hunt and the UFC.

Overeem defeated Lesnar by first-round knockout at UFC 141 back in 2011. While he believes that Lesnar might be interested in a rematch, he has no interest in chasing that rematch himself.

“I beat him up,” Overeem said. “So if somebody wants a rematch, it would be him. I already did it. Why would I chase him? Who cares about Brock? Which fans? He’s not coming back. He’s 43 years old, he’s flunked tests, it’s over with him. He’s not coming back. Last time the waived the testing for him and still he got into trouble. It’s been a debacle. He’s not gonna come back. Listen, if he does, all hats off to him, but I don’t think he’s gonna come back.”

While the MMA world has plenty of questions about a Brock Lesnar comeback at present, Alistair Overeem is focused on his imminent fight with the dangerous Sakai. Heading into the fight, he feels the best he’s ever been.

“I think I’m the best that I ever was because I’m still learning, I’m still growing,” Overeem concluded. “But at the same time, I’m 40 years old. I still have a couple more fights but probably one, two, maybe three years and then I’m gonna call it quits.”