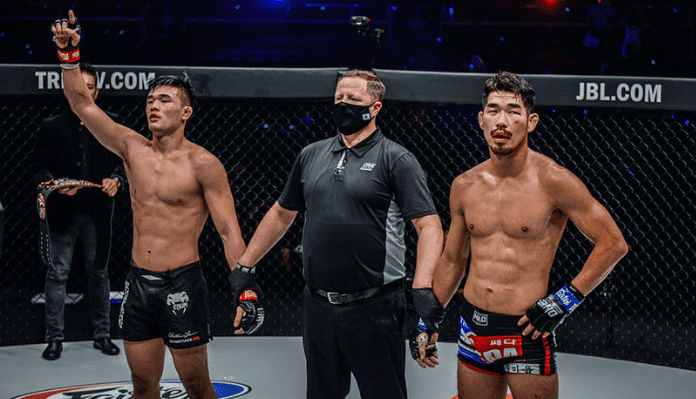 Ok Rae Yoon can rest easy – he’ll remain the newly-crowned ONE Championship lightweight title holder after his win over Christian Lee was upheld.

The Korean scored a unanimous decision win against Christian Lee at ONE Championship: ‘Revolution’ last weekend, but the result was called into question. Immediately after the fight, Lee said the decision was ‘bulls**’ and asked for it to be reviewed.

This was the sixth time that the ONE competition committee have been moved to review a fight, and according to the South China Morning Post,

“Support for both fighters was split, with some on the committee believing Lee won the fight because of damage inflicted and effort to produce a finish, which are top of the list in ONE’s judging criteria, the Global Ruleset.”

Despite ONE Championship CEO, Chatri Sityodtong agreeing with Lee and that ‘the judges got it wrong’ the competition committee ultimately ruled in favour of Ok who took the majority with 14 votes because of ‘internal damage’ inflicted against Lee.

Before facing OK, Christian Lee was riding a six fight winning streak including five finishes. The Korean was also the only fighter in the top 5 that Lee had not beaten. In the wake of the fight, Lee took to instagram to state his case. He wrote,

“Last night, I fought a 5 round war with a very tough opponent in Ok Rae Yoon. He has earned my respect and has shown how resilient he is by surviving all 5 rounds.

However, I absolutely believe that I won this fight. Myself, Chatri Sityodtong, many MMA media and fans around the world know that this fight was not judged correctly or fairly.
If you look at the ONE Championship scoring criteria or any MMA scoring criteria, I beat my opponent in every category,” wrote Christian Lee.

“Please tell me what fight the judges were watching and how they scored this fight.
I’ll ask anyone to put the ONE scoring criteria down in front of them, watch this fight and tell me how I lost this fight.

I believe that ONE Championship will stand behind their morals, do what is right and overturn this decision from a loss to a win.

I am still the champion and I did not lose this fight,” Christian Lee added.

It will be interesting to see if ONE decide to do a rematch. If not, there’s been talk of a fight between Christian Lee and Eddie Alvarez ever since the Underground King first signed with the promotion. Alvarez came up short in his last fight, losing a unanimous decision to OK at ‘ONE on TNT 4.’

Who do you want to see Christian Lee fight next?

Christian Lee still waiting for Eddie Alvarez to earn a title shot in ONE:

“He keeps calling for that fight and I’m all for it. I’d love to accept the challenge but so far he hasn’t been to put together a string of wins to get himself a title shot” https://t.co/5mGqT5jH35