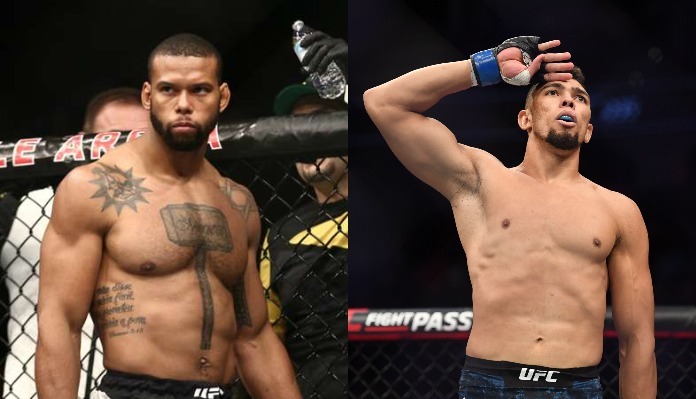 In the main event of UFC Vegas 38, Thiago Santos looks to snap his losing streak when he battles Johnny Walker. Ahead of the fight, Santos is a -160 favorite while the comeback on the Brazilian is +140.

Ahead of the fight, BJPENN.com reached out to several pro fighters to get their prediction for the scrap. The majority believe Santos will get back into the win column in a big way as he will KO Walker.

Devin Clark, UFC light heavyweight: Santos, I feel like he will be patient and finish Walker. He won’t fall for Johnny’s antics.

Modestas Bukauskas, UFC light heavyweight: This is a really interesting one. Both of them are amazing but I think Johnny Walker, his athleticism, volume, and unpredictability will get him the win.

Christos Giagos, UFC lightweight: I like Johnny Walker and I think he can actually catch Santos and finish him.

Alex Morono, UFC welterweight: This is a really good fight, they are both great strikers but I think Thiago Santos can catch Walker and get the KO.

Charles Rosa, UFC featherweight: I have to go with Thiago Santos as he is more durable and we have seen Walker be knocked out and rocked.

Jeff Molina, UFC flyweight: Man, that’s tough, a lot of variables with their KO power. I will go with Santos though, Walker gets too wild and gets hit a lot.

Joe Solecki, UFC lightweight: I think Thiago Santos, and he probably knocks him out.

Tim Elliott, UFC flyweight: That is a toss-up but I will go with Johnny Walker. His striking can cause problems for Santos but either guy can get finished at any moment.

Randy Brown, UFC welterweight: I’m going to go with Thiago Santos. Although he’s on a three-fight losing streak I don’t think Walker is on his level.

Who do you think wins the UFC Vegas 38 main event between Thiago Santos and Johnny Walker?