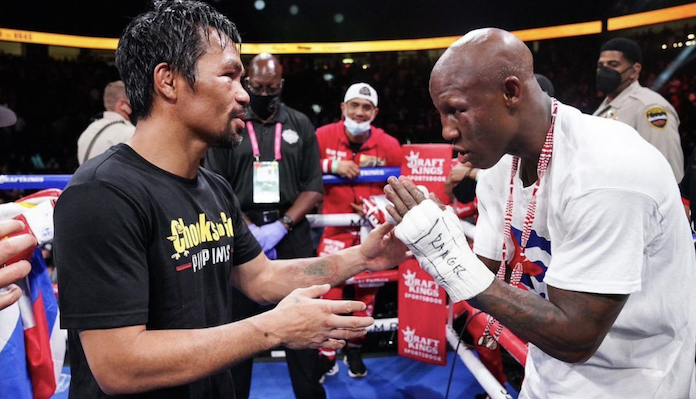 Ugas filled in on short notice to fight Pacquiao when Errol Spence withdrew to an injury, but he pulled off the upset as he won a unanimous decision over Pacquiao. For Ugas, this is by far the biggest win of his boxing career over one of the sport’s all-time greats in Pacquiao. To put a name like Pacquiao on one’s resume is absolutely massive and Ugas knows that. Following the victory, the Cuban took to his social media to praise his rival.

#PacquiaoUgas Thanks to @MannyPacquiao for giving me the opportunity to share the ring with him, he is still one of the best fighters ever. Much respect. Thanks to everyone who supported me. I hope we have given a great fight to all the fans. Incredible fight with Manny Pacquio one of the best fighters in history. Go home and get the champion back. Thanks for being an inspiration. legend. I respect.

The 35-year-old Ugas has now won his last four fights in a row and he retained the WBA (Super) welterweight title in this victory over Pacquiao. As for what is next for Ugas following the biggest win of his career, it remains to be seen, but anytime you can beat someone with the name value of a Pacquiao, it can do wonders for someone’s career.

As for Pacquiao, he’s 42 years old now and saw his three-fight win streak disappear with the loss to Ugas. His future is also up in the air as he turns 43 years old later this year and appears to be on the decline. However, it’s possible that we see Pacquiao fight again.

What do you think is next for Yordenis Ugas after defeating boxing legend Manny Pacquiao?