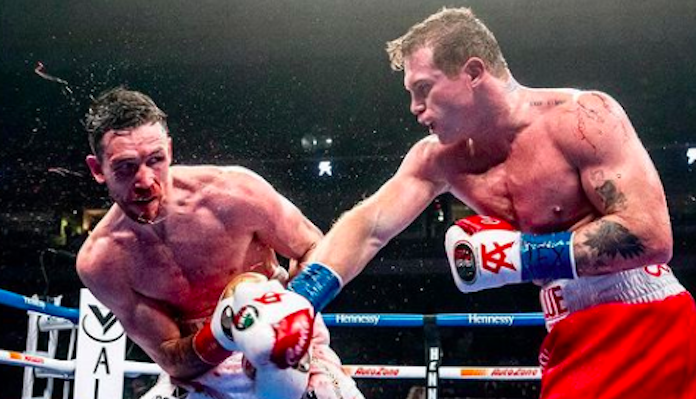 Callum Smith has revealed how Canelo Alvarez was able to deprive him of one of his best weapons in their Saturday night boxing match.

Smith and Canelo met inside the Alamodome in San Antonio, Texas on Saturday night, with Smith’s WBA and The Ring super-middleweight titles on the line, and the vacant WBC super-middleweight strap also up for grabs. Despite towering over Canelo at 168 pounds, and being hailed as one of the Mexican’s toughest tests of late, Smith was ultimately comprehensively thumped en route to a unanimous decision loss.

Speaking to Boxing Social after his loss to Canelo, Smith revealed that the Mexican champion expertly targeted his left arm from the early going to eliminate one his best weapons: his left hook.

“I’m obviously disappointed, I’ve lost for the first time in my career, and it’s a tough pill to swallow,” Callum Smith told Boxing Social after his loss to Canelo (via BoxingNews24). “I said it was intentional.

“After the first round, he was aiming for my [left] arm. He has every right to keep throwing going for my arm, but after round four, I told Johnny, ‘My arm is f****.’ He took away my left hook, which is my best shot,” Smith continued. “Whether that was a plan on their part, it worked. When he was throwing right hooks against me and hitting me in the arm, it was making my arm drop a little rather than being able to return with it.

“But I still jabbed with it,” Smith added. “He didn’t take my whole game away from me. He took that one shot [left hook] away from me. Credit to Canelo. I think he knew what he was doing… In the 12th round, he looked at the swelling and started laughing, and said, ‘Is it sore?’ So it was experience on his behalf that he took away probably my best shot, but again, it’s not an excuse.

“If I had two arms throughout the whole fight, would I have won the fight? Probably not. He was just a little bit too good for me on the night.”

What do you think of this honest assessment from Callum Smith? And what were your thoughts on the expert strategy displayed by Canelo Alvarez?