Home » Boxing News » Anderson Silva says a fight with Jake Paul could b... 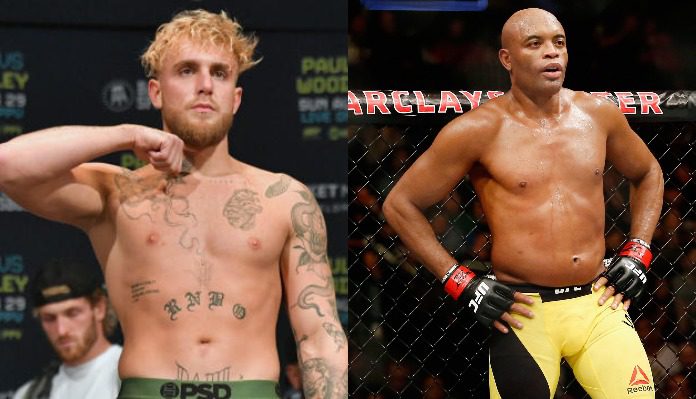 Anderson Silva believes that a boxing match with Jake Paul can indeed be next.

‘The Spider’ is set to face Bruno Machado this weekend in his third bout since leaving the UFC in 2020. The fight is set to be the co-main event of Floyd Mayweather’s return against Don Moore.

Silva’s first two outings were a huge success and were extremely unexpected. After many MMA promotions passed on signing Silva following his UFC release, he turned to boxing.

His first bout was a June 2021 showdown with former WBC middleweight champion Julio Cesar Chavez Jr. Silva sprung a massive upset by defeating the boxer by split decision. He then followed it up with a knockout of Tito Ortiz that September.

With Anderson Silva’s ongoing success in the boxing ring, he’s been named a possible opponent for Jake Paul. Furthermore, ‘The Problem Child’ named the former UFC champion as a possible name for his August return.

Anderson Silva now discussed a possible fight with Jake Paul in an interview with Sports Illustrated. While the 47-year-old didn’t want to guarantee anything, he noted that it’s possible it could be next. Silva also then gave a fair amount of respect to both Jake, and his brother Logan.

“It’s possible. People need to respect the Paul brothers. Those kids are talented, and they’ve opened people’s eyes about the good and bad in combat sports. I’m preparing my body for a challenge. We’ll see what happens.”

Anderson Silva continued, “I made the transition from my MMA career to boxing, and I’m doing something I love. I am training hard every day, so I’m not surprised at my success. I’m not impressed yet, either. I have a lot more work to do.”

What do you think about Anderson Silva’s comments? Do you want to see him box Jake Paul?