Home » bare knuckle boxing » BKFC » Julian Lane says he has “nothing to loseR... 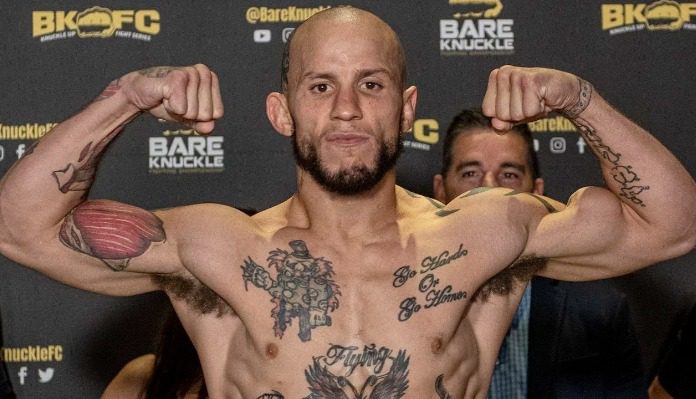 Julian Lane is making a quick turnaround and jumping up in weight to do it.

Lane is set to face David Mundell at BKFC 25 and is moving up a weight class to do so.  Julian says he wanted a quick turnaround after his loss to Mike Perry and he got his wish.

“It’s a fast turnaround. I’m always excited to get back in there and you know I love to bang,” Lane said on Just Scrap Radio on BJPENN.com. “It is what it is, we are going to put on a show for Orlando. The co-main event at that, I’m blessed to be a part of this organization and fighting again.”

Lane is coming off the hard-fought decision loss to Mike Perry in February and although he lost the fight, he says he learned a lot from it. He knows he doesn’t have to rush anything as he can go five rounds no problem.

“Man, honestly, I learned a lot from that. I was in great shape for that fight, I felt like I was rushing things,” Lane said. “That first round I was a little heavy and got careless, dropped my hands, chin up, and got caught in the first round. I learned a lot from that fight, need to pace myself more and pick my shots better and not just try and force that knockout. If it happens it happens, if not prepare for that five-round battle.”

Given Julian Lane is moving up in weight to face David Mundell, who’s the number contender at light heavyweight, he says he has nothing to lose.

With nothing to lose, Lane believes that makes him a more dangerous fighter. He also likes the style matchup to get the stoppage win.

“Honestly man I don’t know how it will play out. I think I can finish him in the fourth or fifth round but I’m prepared for five rounds. Whether it’s a war or quick and easy, I know I’m faster than him, my boxing is better than his and he likes to lead with his head a lot,” Lane explained. “That is where I’m going to capitalize, he will lead with his head and land stiff hard punches and we will see how he does when he is put to that test and has to dig deep. But, honestly, I have nothing to lose, I’m going up a weight class, he’s the number one contender and he has nothing to gain from fighting more, except to get some clout. I have nothing lose so it’s very dangerous for him.”

Should Lane get his hand raised he says he would like to fight Mike Perry next. However, he doubts ‘Platinum’ would take the rematch.

Would you like to see Julian Lane vs. Mike Perry 2?