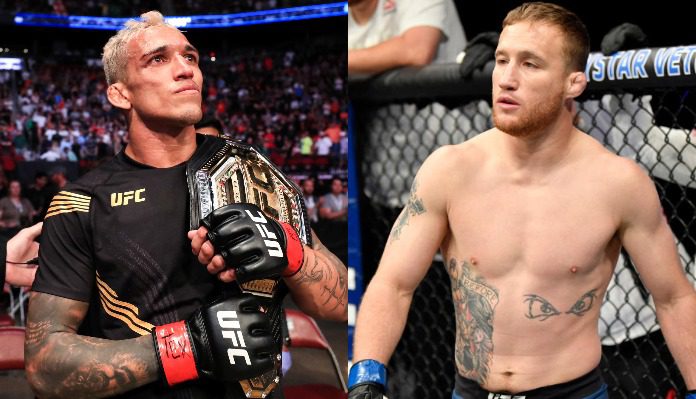 In the main event of UFC 274, the lightweight title is up for grabs as Charles Oliveira looks to defend his strap for the second time against Justin Gaethje. Heading into the fight, Oliveira is a -188 favorite on FanDuel while the challenger is a +152 underdog.

Ahead of the fight, BJPENN.com reached out to pro fighters to get their prediction for the scrap. The pros are split on this one but the slight majority believes Gaethje becomes the new champ as he will catch Oliveira early to get the KO.

Chase Hooper, UFC featherweight: I think it’s going to be very similar to the Poirier fight where Gaethje has success in the first round but Oliveira pulls it off later with a submission.

Vicente Luque, UFC welterweight: That is a crazy fight but I think Oliveira defends his belt. Oliveira is more well-rounded, Gaethje is tough and has the power but the champ is looking better than ever.

Grant Dawson, UFC lightweight: I’m taking Gaethje. I know he’s the betting underdog and people are looking at the Khabib fight and thinking Charles can sub him too. But, I don’t think Oliveira has the chin that Khabib has or the wrestling, I think Gaethje will knock him out in rounds one or two.

Eryk Anders, UFC middleweight: That is a wild card, if Oliveira stands in the pocket and boxes as he did to Chandler and Poirier, that doesn’t end well for him. Gaethje has more power than those two and Gaethje is willing to go to the deep end to get the win. I’ll go with Gaethje but Oliveira could submit him.

Joe Lauzon, UFC lightweight: Gaethje. He gets that knockout early.

Rob Font, UFC bantamweight: I keep going back and forth on that one, it is tough for me. I want to go with Oliveira, it’s a tough one.

Drakkar Klose, UFC lightweight: I’m going to be rooting for Gaethje, I think he can get it done as Oliveira has been rocked and Gaethje hits harder than all of them.

Fernie Garcia, UFC bantamweight: I got Gaethje, he is reckless but is smart in doing it and he can catch Oliveira early.

Brandon Jenkins, UFC lightweight: I love Gaethje but I think Oliveira will survive those early rounds and then get his back and choke him to defend his belt.

Who do you think will win at UFC 274 Charles Oliveira or Justin Gaethje?