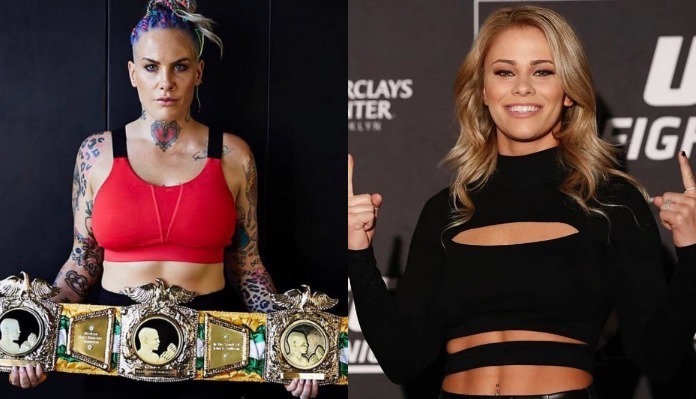 Rawlings and VanZant met in the UFC’s Octagon in 2016, with VanZant winning by head-kick knockout. Not long thereafter, Rawlings signed with BKFC, where she captured a title and picked up the monicker “The Queen of Bare Knuckle.”

Rawlings has since moved on from BKFC, and is now signed with Bellator MMA. VanZant, meanwhile, recently parted ways with the UFC and signed with the bare-knuckle organization.

Speaking to MMA Fighting recently, Rawlings rated her former foe’s chances in the BKFC ring, and her forecast calls for trouble.

“I was and then I wasn’t [surprised she signed with the BKFC] because they probably just threw a ridiculous amount of money at her and she’s just seeing dollar signs,” Rawlings said of VanZant signing with BKFC. “She’s very naive and thinking it’s just two weapons and I don’t think she realizes the skill set it takes, especially in bare-knuckle boxing, to not take damage.

“She hasn’t been the greatest with not taking damage,” Rawlings added. She’s known for being tough and that’s cause she takes a beating. I just don’t think she’s thought it through. I think after her first fight, whoever that is, I think she’ll probably realize that bare-knuckle boxing isn’t the sport for her.”

While Rawlings is currently focused on her mixed martial arts career, she says she’d welcome the opportunity to avenge her loss to VanZant in the BKFC ring.

“I would love to avenge that loss,” Rawlings said. “That loss still sits in the deep pit of my stomach and I’ve never let that go. I think that she has no hope in bare-knuckle boxing against me. I really don’t think she’s going to do well against any of the girls but especially with the girls I faced. I just don’t see her as a boxer. She’s never been a great boxer. She’s been a great grappler. A very good kicker. But boxing is a different game.

“I definitely feel like she wouldn’t get out of the first round with me,” Rawlings added. “I’m very confident in that fight and I’d love to avenge my losses as best I could. Obviously it’s not MMA, it’s not avenging it completely but I would definitely love to fight her again.”

What do you think of these comments from Bec Rawlings? Is Paige VanZant in over her head?