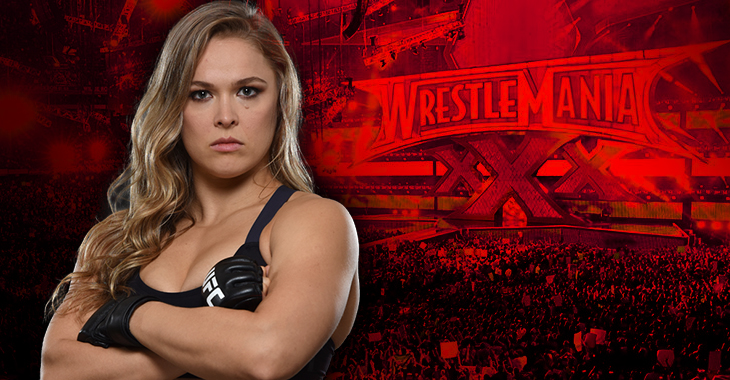 It’s that time of the year again for wrestling and sports entertainment fans as WRESTLEMANIA 34 takes place this Sunday night in New Orleans, Louisiana at the Mercedes-BENZ Superdome.

The WWE’s biggest event of the year is headlined by two former UFC champions in Brock Lesnar and Ronda Rousey.

This year’s highly anticipated Wrestlemania event carries with it a lot of rumors and potential scenarios.

The WWE Hall of Fame ceremony kicks off this weekend’s festivities on Friday April 6 at 8e/5p, with Wrestlemania 34 taking this Sunday April 8. The event kickoff is set for 5e/2p with the PPV airing at 7e/4p! Brock Lesner vs. Roman Reigns – This is a rematch from Wrestlemania 31 where “The Beast” and Roman Reigns engaged in a hard hitting match which resulted in both men coming up short after Seth Rollins cashed in his money in the bank contract and stole what would have been a win away from Lesner. This match marks the fourth straight main event slot for Roman Reigns at Wrestlemania. With that said, Brock Lesnar has got the upper hand on Reigns over the past few weeks. “The Beast” brutally assaulted Reigns after Roman was handcuffed by police just over two weeks ago on Raw. Adding fuel to the rivalry are the rumors that Brock Lesnar plans on going back to the UFC when his contract is up in August. It appears as if “The Big Dog” Roman Reigns will go in to Suplex City and leave with the promotions coveted Universal Title.

AJ Styles vs. Shinsuke Nakamura – This highly anticipated championship bout will also serve a rematch, as Styles and Nakamura met at NJPW’s Wrestle Kingdom 10 event in Janaury of 2016, this just 20 days before AJ Styles made his WWE debut. Nakamura pinned Styles that evening at the Tokyo Dome and plans to do the same inside the Super Dome this Sunday in New Orleans. This has the potential to be the best match on the card as Strong Style and the Phenomenal One always deliver. Ronda Rousey and Kurt Angle vs. Stephanie McMahon and Triple H – This is the match that everyone is waiting to see! The former Olympic medalists, Kurt Angle and Ronda Rousey, taking on “The Authority” of the WWE in Tripe H and Stephanie McMahon. Triple H usually won’t put anyone over at the big event, so it seems like something crazy should happen here. Will Ronda turn heel on Angle? Will The Rock show up and cost Triple H the match setting up a future bout? With betting sites having Conor McGregor showing up at 7/4 odds could “Mystic Mac” run out and help the authority? Anything could happen and so this should be very entertaining.

Charlotte Flair vs. Asuka – The first ever Women’s Royal Rumble winner Asuka will put her impressive 265 match win-streak on the line when she challenges “The Queen” and master of the figure 8 Charlotte Flair for the SmackDown women’s title. This is the first match between Flair and Asuka and it should be one for the history books.

The Miz vs. Seth Rollins vs. Finn Balor – This is another match that could steal the show with the winner probably moving over to Smackdown. The Miz just had his first child, so there is a good chance that he wil; be looking to take some time off after Wrestlemania. With that said, I expect Finn Balor or Seth Rollins to take home the intercotinental title in New Orleans.

Undertaker vs. John Cena – This match is not announced or official, but John Cena has been calling out the “Deadman” for weeks now. Look for the “American Badass” to show up with Kid Rock singing his song in hopes of delivering one “last ride” to John Cena.

Alexa Bliss vs. Nia Jax – The body shaming and bullying angle from Alexa Bliss towards her real life best friend Jax has fans in an uproar. Most fans want to see Alexa punished by Jax for her recent remarks, but I don’t see that happening.

Randy Orton vs. Bobby Roode vs. Jinder Mahal vs. Rusev – A fatal four way where anything can happen, and on Rusev Day? You know whwre I’m going with this.

The Usos vs. The New Day vs. The Bludgeon Brothers – This marks the Usos first main card appearance at a Wrestlemania and I think this match will shock everyone with all the talent. It is time for the Uso’s to finally get their well deserved Wrestlemania moment.

The Bar vs. Braun Strowman and TBD – With Braun Stroman having no partner many rumors have circled, especially with Big Show signing a new two-year contract. Other names rumored to tag with Stroman include Big Cass, Rey Mysterio, even Elias.

– Hulk Hogan returns
– Goldberg enters the Andre the Giant Battle Royal
– Carmella cashes in the Money in the bank
– Bobby Lashley returns
– Samoa Joe returns
– Nikki Bella returns and wins the Women’s Battle Royal
– Kurt Angle to get fired on the following Raw, with Sting to be the new GM
– Bray Wyatt to be “woken” or Braun Stroman’s tag partner
– Sheamus and Cesaro “the Bar” tag team ends