Bellator MMA prospect Valerie Loureda has decided to hang up the gloves.

The 23-year-old has been a star for the Showtime-based company since her 2019 debut. In the Bellator cage, she’s scored four victories in five fights. Her most recent outing came at Bellator 271 in November 2021, where she defeated Taylor Turner via split decision.

Following the victory, she was seen at various WWE tryouts. Loureda then began teasing that as many other MMA stars have done, she would crossover into pro-wrestling. The 23-year-old has now made the move official on The MMA Hour with Ariel Helwani.

Valerie Loureda is now an official member of the WWE roster. While she was also happy to announce this new chapter, she was also emotional when discussing her MMA career. While Bellator allows its roster to do pro-wrestling, Loureda has seemingly decided to focus full-time on the WWE.

In addition to announcing her signing, Valerie Loureda also announced her MMA retirement. She thanked Bellator and Scott Coker for bring her in, and giving her the opportunity. 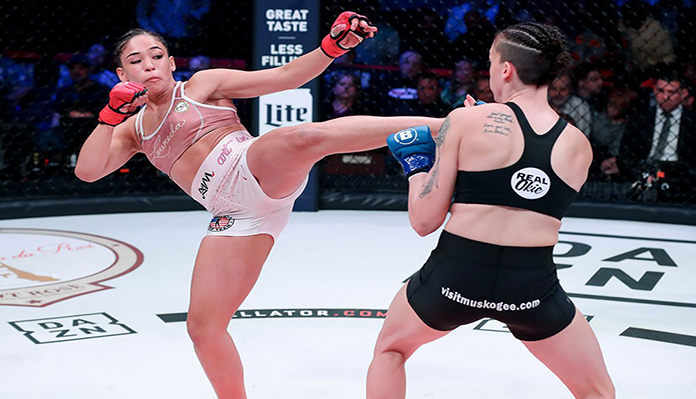 “I have now become the first Cuban-American woman and I am now a WWE superstar. I’m really excited, and I’ve dedicated my whole life to martial arts, and everything has come to this moment. And this is my opportunity to showcase my culture and entertain the world. I’m emotional because I’ve worked really hard in my whole life. I’ve had a very hard upbringing, and every day, I’ve always just believed in myself, and trained hard hoping to make it to the next step and just chasing a dream that I’ve had in my heart since I was a baby.” (h/t MMAFighting)

What do you think about Valerie Loureda signing with WWE? Sound off in the comments below!