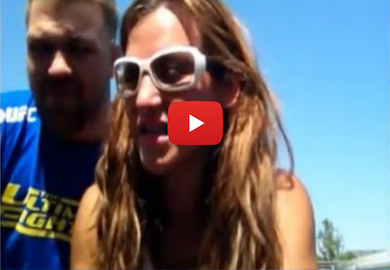 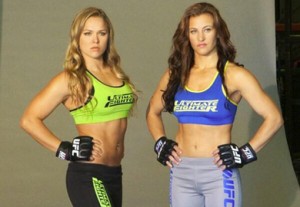 We are just a few shorts weeks away from the debut of ‘The Ultimate Fighter 18: Rousey vs. Tate.’

Miesha Tate and the UFC held a google hangout session with Fox Sports to field questions and help promote the reality series, which is expected to deliver some intense fireworks between the two bitter rivals.

“I’ve had people I’ve worked with before that I didn’t get along with or whatever, but never to this extent. I don’t know what her reasoning was for it, but at one point she just flipped a switch and she just became this mega b!tch,” Tate stated. “For the rest of the season, it was just horrible having to deal with her.”

“She puts on this tough girl act. She flips me off, she cusses me out, she does all these things I really think deep down inside because she respects me a lot. She is realizing the first time that she was able to get away with that and it bothered me and she was able to emotionally manipulate me. This time it’s not. I think she’s even more aggravated about it and that’s why she’s really escalated,” Tate said.

“Ronda has been the ‘cool girl’. A lot of times the bully in school is the ‘cool person’, but when you grow up and start to realize that’s not cool, people will see the truth. They’ll see why it’s been impossible for me to like Ronda.

“There’s no way I could possibly like her,” Tate reiterated. “She’s been incredibly rude to me from the very beginning. That’s how our rivalry got started. It’s not going to change with her attitude. She was very disrespectful on the show. I think that’s what she’s more worried because honestly, her true colors came out in that six weeks.”

“[Rousey]’s happy and laughing when she’s making jokes at someone else’s expense. Other than that, she’s a pretty rude person.”