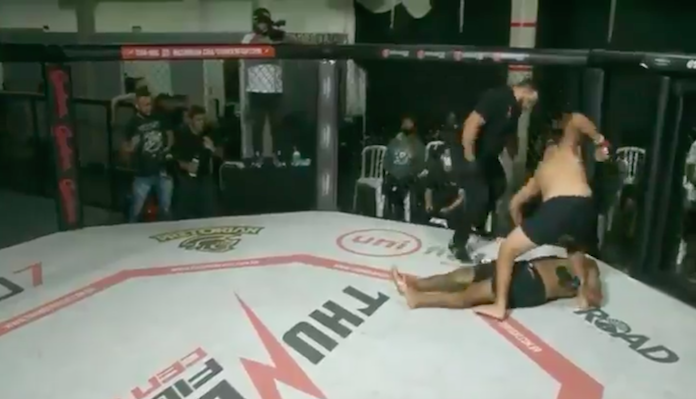 A Brazilian MMA fighter was knocked out twice in what has to be one of the all-time worst stoppages in the history of mixed martial arts.

An amateur MMA bout between 198-pound catchweight fighters Jessian Lucas and Michael Douglas (not the actor) was featured this past Sunday in Brazil under the Copa Thunder de MMA Amador banner. The bout was sanctioned by CANMMA, which also works with the UFC when it does events in Brazil. However, referee Kleber Lopes embarrassed the sport when he made one of the most bizarre and terrible stoppages you will ever see.

Watch the late MMA stoppage in the Lucas vs. Douglas fight below (via Barrele la Pierna).

As you can see in the video, Lucas landed a high kick 11 seconds into the bout that knocked Douglas out. At this point, the fight should have been stopped. Lucas did not want to punch Douglas anymore but the inexperienced MMA referee allowed the fight to continue and Lucas landed unnecessary ground and pound to a defenceless Douglas.

The vice-president of CANMMA, Anderson Ulysses, issued a statement on the stoppage (via MMAFighting.com).

“At 11 seconds of the first round, Michael was knocked out by a high kick to the head and the referee made his first mistake, not interrupting the fight. He committed the second mistake by allowing the fight to continue with the athlete unconscious,” Ulysses wrote in the statement about the controversial MMA bout.

“We apologize to the athletes, teams, MMA fans, and Thunder Fight for the mistakes committed due to lack of experience of the professionals. We inform that the referees that committed the mistakes were interns who were getting tested and had no experience as referees, but had undergone rule courses previously.”

This particular MMA event also featured a rule where strikes to the head of a grounded opponent were not allowed (a common rule in amateur fights) but the referee let the fighter continue to get pounded. Fortunately, it looks like Douglas escaped with no serious injuries. However, he did take extra punishment that wasn’t needed.

Where do you think this referee blunder ranks in the worst you’ve ever seen in MMA?