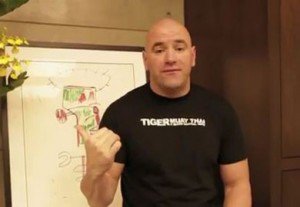 “I get the call this morning that he’s been arrested in his hotel room, I go straight to the police, the sheriff’s department here and start putting the pieces together on what’s going on and how to fix it. I’m sure you could tell by my tweeting I was 100-percent confident that I was going to get him out for this fight.

“Basically what happened is they do not like him in Des Moines, Iowa where this warrant is from. Basically, they’re going to extradite him, one of those situations, or not we’ll see what happens with this whole thing, but the kid’s been here since Monday no secret that he was going to be here. They arrest him at almost noontime on Friday after he weighs in yesterday and everything else. In my opinion after dealing with this all day, that was done on purpose.”

“I was devising a plan to break him out and come over here and do this fight. So they finally get to a deal with me for an astronomical amount of money to bail him out and I agree to it and then they did it again. So they’re going to stick it to this kid big time when he gets down to Iowa. They don’t like him, they’re going to stick it to him, and they run me out all day playing games with me. People have gone on three state killing sprees and get freaking bailed out of jail. This kid’s got an assault charge in Des Moines, Iowa and he’s not going to have fun when he gets there cause they got it out for this kid big time.”

“I was willing to have two police officers, armed police officers bring him from jail, to come fight tonight, and then bring him back to jail. Let’s do that, let the kid get paid, because he’s going to have to spend money on this thing anyways he’s got a family to take care of, it’s crazy. Continue reading on page 2… (Video included)

“I’ve seen crazier (expletive) than this. Floyd Mayweather got to decide when he went to jail. But this kid on an assault charge couldn’t come out and fight today when he would have gone back to jail, I would have bailed him out, I would have flew him to Des Moines, Iowa to face the charges down there. I was willing to do anything and they dragged me out and played games with me all day.”

“There’s no doubt he’s responsible for the situation, but again he’s got a completely different story. We all have different stories when we’re in trouble, but I was trying to help him.”

“It’s a big deal to him. This kid isn’t Jon Jones or Rampage. Do you know what losing this purse means to a kid like Jeremy Stephens, it’s a huge blow. This is how these guys make a living, this is how they feed their families. He spent money to get to this fight, money he probably didn’t have and now he’s really screwed cause the fight didn’t happen.”

“Jeremy’s in a whole other world of trouble. That guy might be in Des Moines, Iowa for the next two years. I’m telling you I’ve never seen a situation where a guy couldn’t get out on bail for an assault charge. He didn’t kill three people, he didn’t murder 20 people in three states, he’s not wanted for any horrible crimes, it’s an assault charge,” said White.

“He’s in big trouble, so I don’t know what’s going to happen to Jeremy.”