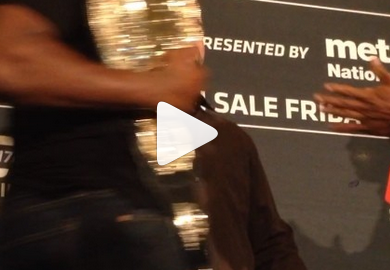 Earlier today we broke news that Jon Jones and Daniel Cormier brawled at the MGM Grand during the staredowns of UFC Ultimate Media Day promoting UFC 178. In this up close video we can see Cormier pushing Jones before Jones drops the belt and shoves Dave Sholler to the ground before throwing a big overhand left to Cormier.

Check out the video courtesy of Esther Lin