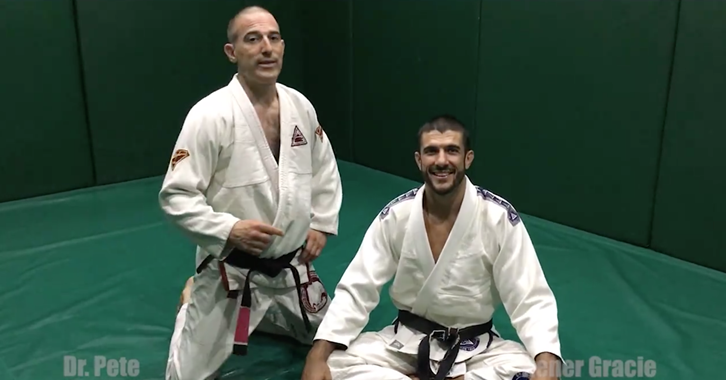 Rener Gracie is the grandson of Brazilian jiu jitsu co founder Helio Gracie, and the son of UFC co creator Rorion Gracie. As the head instructor at the Gracie Jiu-Jitsu Academy, and the co-creator of Gracie University, he is widely considered one of the finest BJJ instructors in the world. Together, he and Dr. Pete break down an absolutely savage method of posture control – a key addition to any BJJ practitioner’s arsenal.

Watch the pair’s must-watch tutorial in the video at the top of this post.

The 33 year old Rener Gracie has been studying BJJ for more than 25 years. The fruit of his dedication to his craft is a fourth-degree black belt. He received his black belt in 2002 from Helio Gracie. In addition to his work with Dr. Pete, Rener Gracie has ensnared viewers with his informative and often hilarious Gracie Breakdowns, which he shoots with his older brother Ryron Gracie.

For more from Dr. Pete, explore these links:
http://sfgoldman.com
http://twitter.com/sfgoldman

What do you think of this informative video on posture control from the ever-informative Rener Gracie and Dr. Pete? Join the conversation in the comments section, and be sure to share!