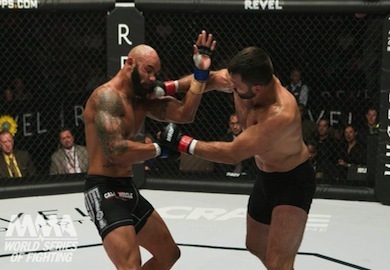 After his victory over both Mike Kyle and early adversity, Andrei Arlovski showed fans that he could not only take a punch, but he can come back and outwork an in-shape power puncher. Arlovski out-boxed Mike Kyle in the main event of there World Series of Fighting 5 main event bout.

After his bout with Kyle, I caught up with Arlovski for a quick word before he retreated to the dressing room to enjoy his victory with his camp.

Adam Conklin: I’ve never seen you come in out of shape for a fight, but coming in as a late replacement, is there anything that you wish you had more time to do in your training?

Andrei Arlovski: Oh definitely, more time is sometimes better, and after my jaw surgery I was out for 8 weeks and six weeks I started to do some conditioning and after 10 weeks I started a full sparring camp. I’m sure it wasn’t enough time and like I mentioned before, I have a lot to work on at the gym. I’m happy I’m still young and I have a lot of time and a lot of energy and this is most important to me.

AC: Did any strikes that you received tonight bring up pain from your jaw injury/surgery from back in March after the WSOF 2 main event against Anthony Johnson?

AA: No, the surgery [was] fine. My biggest test was when I sparred with Jon Jones. He landed a good left hand and a high left kick right on my jaw. Actually, Mike Kyle landed some good right hands too.

AC: Were you surprised Mike Kyle didn’t go for more takedowns after you used your jab so effectively?

AA: Back a few years ago I train[ed] with Mike Kyle on old team at AKA. I thought he might look for some takedowns, but yeah, I was prepared for this. But after like, the middle of [the] second round, he tried to do something like a single, against the cage, but I was confident.

AC: Do you feel like you executed everything in your gameplan that you set up with Greg Jackson?

AA: (Laughs), No, again, this my problem I didn’t follow 100% and actually my cornermen yelled something during the fight. I’m happy, you know.

AC: Now you’re looking for a rematch with Anthony Johnson?

AA: I would love to.

There is no official word on whether or not the 34-year-old Belorussian will be granted a rematch of a fight that snapped a 4 (5 if you count NC over Sylvia) win streak, against Anthony Johnson, or if the World Series of Fighting will hold a tournament to crown the first heavyweight champion. All Arlovski seems to know is that no matter what, he is ready for it.