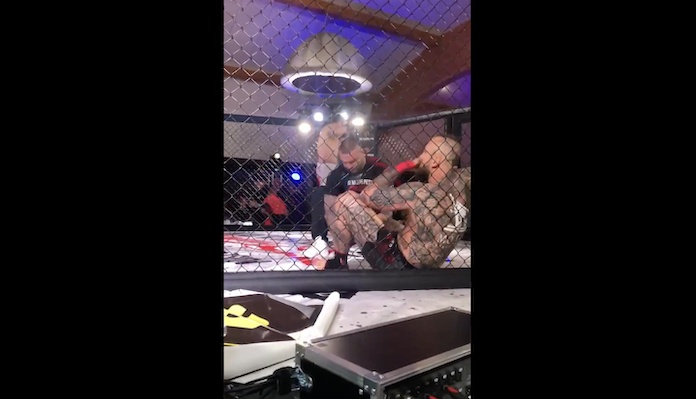 Another horrific shin break occurred this weekend in a kickboxing match when Adam Wisniewski broke his leg against Vadim Shablevskyi.

Wisniewski and Shablevskyi took part in a modified-rules K-1 kickboxing match in Poland’s “Bloody Sport” promotion. According to the promotion’s official website, “Bloody Sport is an elite tournament in the K1 formula, during which players fight barefoot.” On Saturday night, they fought and it was a brutal scene as Wisniewski broke his leg on a kick. It was very similar to what happened two weekends ago at UFC 261 when Chris Weidman broke his leg against Uriah Hall. This one was just as bad, and you can watch the video below.

Adam Wisniewski loses the fight due to a terrible injury.

According to his Tapology profile, Wisniewski has a 2-5 record in MMA since making his professional debut in 2013, though he has fought no one notable. In kickboxing, according to his record, he is 1-1, with a win last year in Bloody Sport via TKO this past September. Unfortunately for Wisniewski, this latest loss was also a TKO, but a broken leg against him.

As for his opponent Shablevskyi, according to his record, this was his first professional fight, so the fact that he won via leg break TKO is certainly something. No fighter wants to injure his opponent to get the win, so it must have been quite some feeling for this young fighter to see the first opponent he’s fought go down to a leg break. Still, it goes as a win on Shablevskyi’s record, while for Wisniewski it’s a tough way to suffer another loss.

Hopefully, we don’t see any more of these leg breaks anytime soon, as between this Wisniewski one and the Weidman one, it feels like we have met the 2021 quota for shin breaks in combat sports.