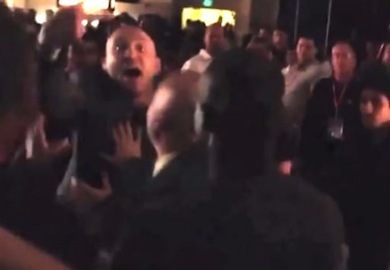 We know that Dana White’s initial reaction to the Hall vs. Mayhem Scuffle wasn’t all that bad for Uriah Hall, who is still under contract with the UFC.

For the UFC boss, his dislike for Mayhem Miller and the circumstances surrounding the incident were both reason to look the other way and not invoke any kind of disciplinary action against his fighter.

When asked about the incident on twitter a week ago, the UFC boss replied with,

@dylanwardenn fuck no!!! I'm gonna give him a bonus!!!

Now another week removed from the altercation, White elaborated on the subject offering up the following explanation and thoughts on the matter.

“We don’t ever want our fighters fighting outside of the Octagon, but guess what? There’s gonna be situations where men need to handle their business and that’s one of those cases. First of all, Mayhem Miller, how this guy is still walking the f***ing streets of America is beyond me, number one. Number two, he deserved what he got from Uriah Hall. It’s no different from the situation with Roger Huerta, right? Roger Huerta was in a situation where a guy punched a girl in the face and knocked her out, knocked her unconscious. Then Roger Huerta knocked him out. There’s gonna be cases where I don’t give a s**t.”