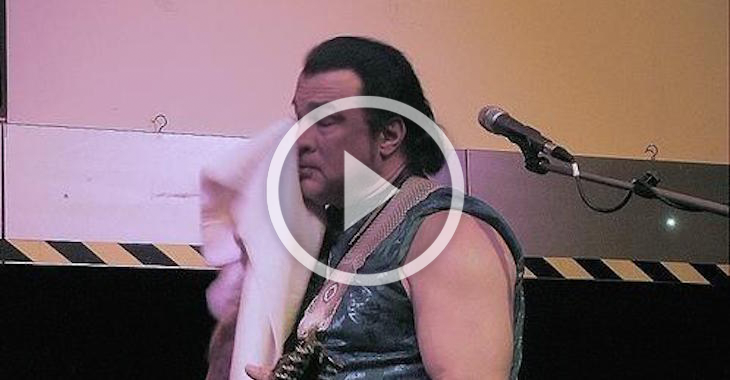 “Master” Seagal will go down in history as one of the most mysterious figures of our sport. While it’s clear that pioneers like Bruce Lee and Royce Gracie paved the way for modern day fighters, Steven Seagal still claims to have an impact on the sport. His track record speaks for itself; He has taught the likes of Anderson Silva and Lyoto Machida the moves they used to finish challengers inside the octagon.

“The California Kid” Urijah Faber had the opportunity to sit next to Seagal at a UFC event and recalled a story his manager told him about the Aikido master.

‘Irwin Staff used to manage [Steven Seagal]. Seagal calls [Irwin] one time, and he’s like teared up on the phone,” Faber said during his appearance on Stud Show Radio. “This is true because my manager Mark Schulman told me this,” Faber assured the listeners.

“He said Seagal is calling [Irwin] and he’s all shook up on the other side, and Irwin’s like, ‘…Are you crying?’. [Segal] is like, ‘Yes, I’m crying… I just read the script. It’s amazing! It’s brought me to tears… It’s unbelievable.’”

Irwin, excited to learn who wrote the script, asked “Master” Seagal who wrote it.

While many fans doubt Seagal’s abilities, it seems like Faber respects Seagal’s game. “Dude, that guys is a character, man,” Faber said. “I sat next to him at one of the UFCs not too long ago and had a good conversation with the guy. I guess he grew up in Japan. He came over here in his 30s and he got into movies at nearly 40. He’s got some good stuff, and he’s massive.”