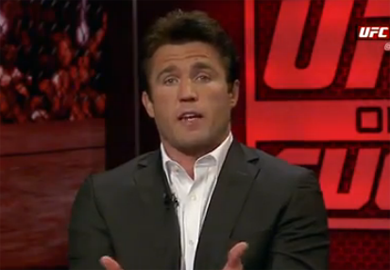 “The show is coming up, it’s on FX and it’s coming to a living room near you. I would also like to mention to the media, and I really hope they report this, this show is the single biggest and toughest tournament that we have in this sport. This isn’t a four-man tournament that gets spread over the course of a year. This is a 32-man tournament that will take place over five and a half weeks and to be aired over 10 of the most successful ratings FX has ever seen. This is a tournament that is tougher than the Olympic games, it’s tougher than the NFL playoffs, it’s tougher than any tournament in sports and that storyline constantly gets missed. This is no more reality TV than the NFL playoffs or the Olympics were. It’s real and it’s on TV. The bottom line is, this is a tournament. This is a tournament so tough that great fighters like Josh Koscheck, Gray Maynard, Stephan Bonnar and Chris Leben couldn’t even win it. It’s so tough, that world champions Forrest Griffin and Rashad Evans came through it. I happen to know the talent that has been selected for this show, this will put all of those seasons to shame and there is a world champion, if not more than one, that’s in these young men. Write this down, the toughest tournament in mixed martial arts is coming to FX.”

During Wednesday’s UFC tele-conference to promote season 17 of “The Ultimate Fighter” the Chael Sonnen hype machine turned it’s attention to the UFC’s reality series by proclaiming it the toughest tournament/athletic competition in the world.

Check out the full audio from the call below.