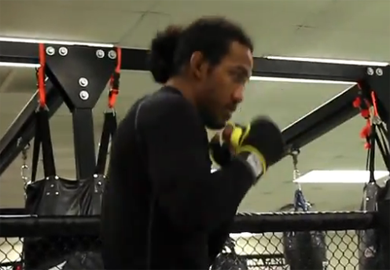 “Every time a fighter does what they’re supposed to do, and improves and gets better every fight, I wouldn’t say the blueprint goes out the window, but it can be harder to execute the blueprint,” Henderson steadily explains. “Guys leave holes open in their game. Those holes get smaller if you do what you’re supposed to do and get better from fight to fight. Nate Diaz has shown a big improvement from his early years in the UFC and he’s made those holes a lot smaller, but I think the blueprint is definitely still out there on how to beat Nate. It’s not just, ‘Oh, we think you’ve got to do this. We think you’ve got to do this.’ No, if you want to beat him, you’ve got to do A, B, C, and D. And then you beat him. Period. You’re done… “[Their in the cage “attitude”] works well for them. I’m definitely preparing myself mentally to face that, and when I do face that, act accordingly. I don’t intend on it affecting me. I don’t intend on going out there and being all mad, all of a sudden getting emotional.”

So how do you beat Nate Diaz, what is this blueprint the champ speaks of?

The five UFC losses on Nates record have all come way of decision to better wrestling based fighters. Guys who have good enough submission defense to not get caught in a Diaz trap and grind him out for the duration of the fight.

As Benson Henderson tells MMAFighting.com he believes that the blueprint for his next challenger has already been laid out. But has Nate closed those gaps on his game or does Ben have what it takes to exploit them once again?