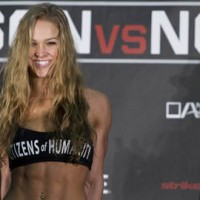 Will Ronda Rousey collect another arm or will she taste defeat for the first time?

Sources close to the fight have confirmed that Ronda Rousey will defend her Strikeforce Women’s Bantamweight Championship against top-contender Sarah Kaufman on August 18 in San Diego, California, MMAFighting learned. It is expected that Zuffa will announce the upcoming fight within the next couple of weeks, most likely during a UFC broadcast.

Olympic medalist Ronda Rousey (5-0) has been on a rampage ever since she made the transition to mixed martial arts. Only five fights into her career, she has defeated all of her opponents with armbars in the first round. Her most recent victory was in March 2012 where she captured the Strikeforce Women’s Bantamweight Title from Miesha Tate. Tate proved to be a worthy competitor and almost made it out of the first round, but she succumbed to Rousey’s superior grappling skills with only 33 seconds left on the clock.

Sarah Kaufman (15-1) is ready to regain the title she once held. After losing the Strikeforce Women’s Bantamweight Title to Marloes Coenen in 2010, Kaufman was no longer under Strikeforce contract and was free to fight elsewhere. She brought her talent to AFC where she knocked out Megumi Yabushita in her debut fight. She quickly returned to Strikeforce just two months later and defeated Liz Carmouche. She further solidified her position as the challenger to Rousey’s title when she put on an impressive performance in her victory over Alexis Davis.

Even though the bout was just confirmed today, the two have been talking trash since the bout was rumored back in May.