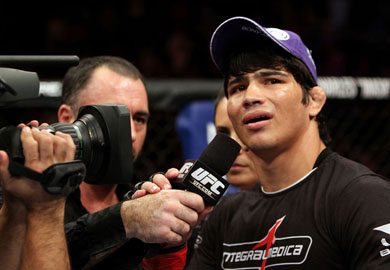 UFC officials announced that four men would be taking home the additional “Of the Night” bonuses at “UFC on FX 3: McCall vs. Johnson”. Eddie Wineland, Scott Jorgensen, Erick Silva and Mike Pyle all earned an additional $40,000 for their respective performances.

Mike Pyle earned the “Knockout of the Night” bonus after after he sent Josh Neer crashing face first into the mat with only four seconds remaining in the first round. Pyle handed Neer his first knockout loss in over five years.

Throughout his two previous fights, Erick Silva sent a message to his weight-class that he is a dangerous striker. Tonight, he showed diversity and proved to his opponents that they need to be worried by his ground skills as well when he earned “Submission of the Night” honors. Silva submitted Charlie Brenneman with a rear naked choke towards the end of the first round.

“Fight of the Night” went to the very first fight on the main-card as Scott Jorgensen and Eddie Wineland left it all in the cage. The first round was a back-and-forth affair that saw Jorgensen get dropped three minutes into the fight, but he showed resiliency and made it back to his feet to make it to the second round. Jorgensen gained momentum in the second after he landed a nice right knee that bloodied Wineland, but ultimately got knocked out with a right-cross.