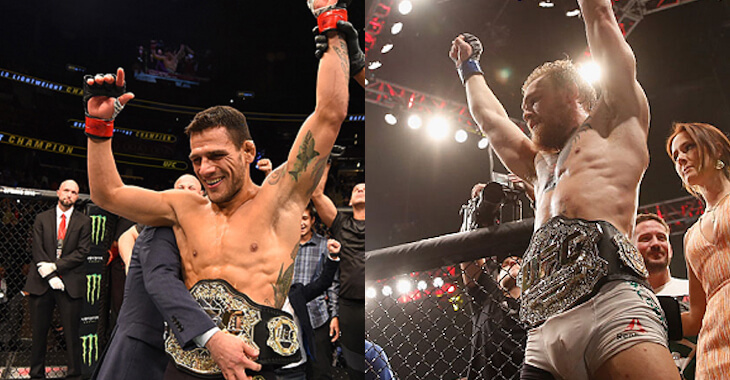 One of the most historic fights in UFC history is coming upon us as Conor McGregor will look to become the first fighter to simultaneously hold two championship titles in two different weight classes. McGregor has a tough task ahead of him in the lightweight champion Rafael dos Anjos.

“He always said he was going to beat Aldo and win the lightweight title. My job is to be there and defend my belt,” dos Anjos told MMAFighting.com. “I think Aldo deserved an immediate rematch because of how the fight ended and because he was undefeated for 10 years, but (McGregor) wanted to move up and fight me. I will be there to defend my belt and send him back to the featherweight division so Aldo can finish him for good.”

In regards to how McGregor stacks up against him in the fight, dos Anjos said that his list of opponents has been a greater test than what McGregor offers.

“I’ve fought the best lightweights in the world, and he’s a featherweight,” said dos Anjos. “He’s a good fighter, but I’ve fought better fighters. I just fought Cerrone, who is almost twice his size. People say McGregor is tall and all that. He’s as tall as I am, or maybe even shorter. He might have a longer reach, but I’ve fought Nate Diaz and Cerrone, who had reach advantage, and fought Anthony Pettis and Ben Henderson. I was tested against the best.

“I won’t let him move,” said the Brazilian. “I think the only guy he’s faced so far that could make him feel that was Aldo, with his hard punches and kicks, but there was no fight. There was no fight. Against me, when the fight starts, it’s going to be different. I’m a lightweight, it’s completely different. This guy said he can beat Jesus, and I will show him what a man of God can do on March 5. I’m going to teach him this lesson.”

“We all saw what happened to those who talked trash at me,” he continued. “I can get in there and be professional, stay cool. This jackass said I’m a traitor to the Brazilian people, but he’s just trying to get some fans there. My walkout song says it all: ‘the shout of a warrior, Brazilian citizen’. If he’s so nationalist, why is he coming to the U.S. to train two months before the fight? Why doesn’t he stay in Ireland? Why are you coming to the U.S.? You work for an American company, man. I’m sure Brazilians are with me, and they want me to shut this guy up.”

Dos Anjos added in the way he wants to finish the featherweight champion, utilizing his technique and experience as a jiu-jitsu black belt.

“Aldo was going to be the first to show him that, but there was no fight,” he added. “I won’t call it luck, but a moment of distraction from Aldo. Maybe he got too emotive and tried to finish it quickly, but I won’t be like that. I will be calm and kick his ass for good. I want to finish him. I want to submit him, actually. Sometimes you knock someone out and the way they go down isn’t nice, but when you submit someone… I want to make him quit, I want him asking me to stop. That’s what I want.”

How do you the fight unfolding fans? Predict the fight outcome and let us know it in the comments!