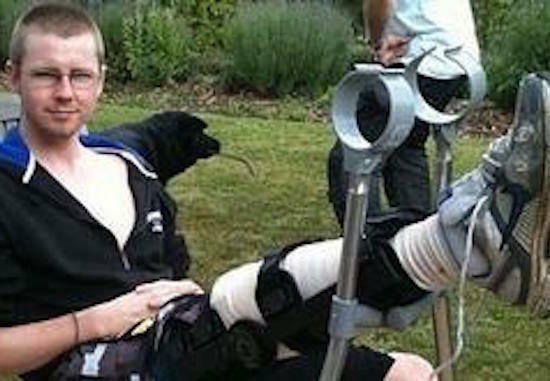 Jotham is now set for what is reported to be the third ever donor leg operation.

Three years of waiting after a road crash which nearly killed him, Stu Jotham is looking forward to pioneering surgery which should give him a fresh lease of life.

Since 2011 Stu, 29, has been on a list for parts of a donor leg which will be screwed in to what remained of his right leg after a serious road collision when he was knocked from his motorcycle.
Advertisement

Surgeons are planning to implant part of a donor thigh bone (femur), calf bone (fibula) and ligaments, with artificial cartilage, in February.

“I want to be able to run again,” said Stu, who was working as a landscaper when the collision happened.

“Going through it has been hard, of course, but there are people in worse places than me. I have to stay positive.

“I have been doing blogs and a video blog, which has helped me and given me huge support from people too – some of them don’t even know me.

“I want people to know that you can get through things like this – you only have two options.”

When he was told a donor had become available last month, he felt a mixture of elation and sadness.

“That was quite a phone call but of course, someone has died which is so sad. I am incredibly grateful for that and to the NHS.”

In the immediate aftermath of the collision, he felt himself slipping in and out of consciousness and were it not for one remaining vein and a firstaider who told him to stay with her, he may well had died at the scene.

He was taken to Gloucestershire Royal Hospital, then Bristol.

“I was told there was a 95% chance I would lose my leg and I begged and pleaded with them because I had a martial arts fight in two weeks,” said Stu.

Three operations followed, where tissue from his back was used to build up his leg temporarily, and skin grafted from his left leg while a donor was found.

“I know I won’t be able to fight again but I want to run and train, and travel with my girlfriend Carrie.

“When I’m older, I want to be able to run around. 2015 is pretty much written off for rehab’ but I want to come back strong and fit.”

Get the full story here.