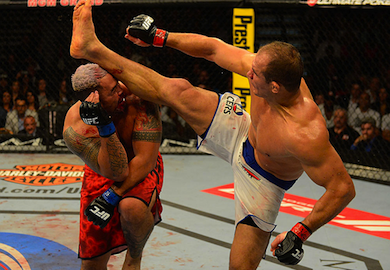 This past weekend we saw Mark Hunt KO Roy Nelson with a brutal uppercut. We knew going into this fight that both fighters had unbelievable chins and possessed some of the best one-punch knockout power in the sport.

We have compiled some of the best .gifs on the internet of Mark Hunt eating brutal power shots throughout his career.

First off we have Hunt vs. Sefo, Hunt ended up losing this fight, but surprisingly, it wasn’t due to a KO, Hunt lost via decision. We’re talking about Ray Sefo here…a man with 38 of 56 career kickboxing wins by KO.

Next we take a look at Hunt getting hit by Mirko Cro Cop. Cro Cop has a saying “Right leg hospital, left leg cemetery.” Hunt went down from this brutal kick…but made it back to his feet. Hunt ultimately lost the fight by decision.

Next we take a look at Hunt getting hit by Mirko Cro Cop. Cro Cop has a saying “Right leg hospital, left leg cemetery.” Well, he connected on Hunt with the left leg, and the Super Samoan certainly didn’t go to the cemetery…or even go down this time. The only explanation we can come up with is that Hunt’s body adapted from the first fight with Cro Cop (above). Hunt went on to win this fight via unanimous decision.

Next we look at a more recent fight, Hunt’s fight with Junior Dos Santos last year. Lets keep in mind that JDS has incredible one-punch knockout power, that even saw him put away Cain Velasquez. Here JDS lands a brutal overhand right that puts Hunt down. The Super Samoan hits the ground, and uses the momentum to roll himself back up… Shoutout to UG user Galanis for the finds.