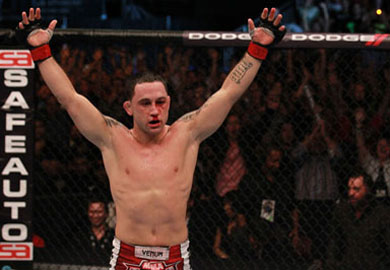 By Evan Stoumbelis
Lightweight #1 contender and former Lightweight champion Frankie “The Answer” Edgar believes there are “massive changes” needed for his rematch with Ben Henderson this Saturday at UFC 150. Frankie said:

“I think there’s massive changes that need to be made in every fight, whether you win it or lose it, but I was happy with my performance in February. Ben’s a tough kid, and I went in there and fought hard, he fought hard, and things just didn’t go my way that night. Sometimes you want to make sure your punches land a little more precisely, I guess. Ben’s never had a black eye or a broken nose in any fight, so I don’t know if it’s me that can do that. I’m hoping I can, but some people can take damage a little better than others. Me, I get beat up a little bit in my fights whether I win or lose.

What do you think PENNATION? will Edgar be successful in recapturing the title?