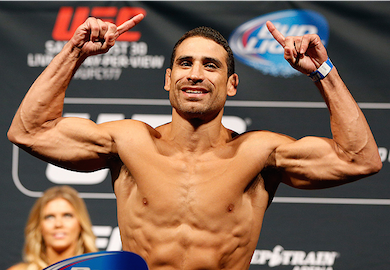 UFC lightweight, Danny ‘Last Call’ Castillo, will fight on Jan. 3 at UFC 182, but the Team Alpha Male fighter made time to speak with BJPENN.COM radio and covered a wide range of topics.

Among some of the highlights, Castillo spoke about the brutality of the sport and how he’s come to realize that being a professional fighter doesn’t last forever. Castillo hopes that outside ventures like his hot Pilates studio will allow him to have a comfortable life after his fighting career comes to an end.

“It’s a rough sport; your body takes a lot of beatings and not to mention your brain. You can’t just take punches for the rest of your life. I’ve seen a couple fighters that I’ve talked to like three years ago and I run into them again and it’s like whoa, that guy took one to many punches; he’s slow with his words and he’s fumbling words and he’s stuttering. That’s like one of the saddest things to me, is to do something that you love and have the side effects linger on for the rest of your life. I try to take as many precautions as I can. I limit my sparring as much as possible, I went and bought the best headgear as far as money can buy, when I’m not in fight camp I try not to take any damage to the head, I’m getting in the hyperbaric chamber, there’s all kinds of things that you can do. You know, Uriah Faber is probably one of the biggest names in the sport in terms of being a businessman. He’s really smart and having him as a mentor and seeing the things that he does has definitely helped me a lot and it’s motivated me to be more than a fighter. I’m really competitive but I’m competitive at life, not just fighting or wrestling or any of that. I want to make sure that when it’s all said and done, that short window of time that I had to compete, that I monetized as much as I could, my Instagram, my Twitter followers, like all that stuff goes a long way and I try to use that to my advantage and help me out in the long run.”

‘Last Call’ then spoke about the issue of fighter pay. There are plenty of fighters who think that they deserve to be paid more and Castillo is no different. However, the lightweight fighter says that he gets paid well and is happy with what he gets to do for a living.

“You see a lot of those fighters, complaining about the money issues with the UFC. Do I think that I should get paid more money? Absolutely, but who doesn’t? Floyd Mayweather wishes he got paid more money, LeBron James wishes he got paid more money, you wish you got paid more money, that’s just the nature. If you don’t think that you’re worth more than you’re getting paid for then there’s something wrong with you, because I value my time and the effort I put into this sport, but then again, I can’t just ask for handouts, and I’m probably one of the only fighters out there that’s going to be telling you this. I get paid well for what I do because I’m happy. I truly enjoy my life. Like when I go to the gym, I’m training with my buddies, I’m having a great time, I’m laughing. It’s tough and it’s a rough sport and I make these huge sacrifices but at the end of the day I wouldn’t want to do anything else.”

Make sure to listen to the whole interview HERE. Castillo fights this Saturday, Dec. 3 at UFC 182 in Las Vegas. Castillo is scheduled to fight in the main preliminary bout broadcast on FOX Sports 1.