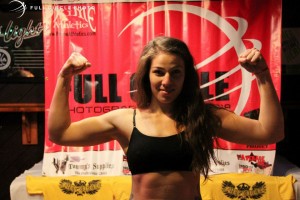 Our first guest has already proven that she is a woman in the sport not to take lightly, with 3 amateur wins and all coming by way of Armbar. Marina Shafir might have a look similar to her training partner, but believe me when I say she is her own person and fighter. Marina will come on the show tonight to talk about her amateur career, turning pro, and the future for her in the sport. Of course we have to talk a little about her early days in Judo and how she got into the sport, the TUF Tryouts, her best friend coaching, and if being so close to the champ puts any extra pressure on her. Make sure to follow Marina on twitter @MarinaShafir

Our next guest is known as Hands of Stone, and she is looking to lay those hands on her opponent Fallon Fox at CFA May 24. Allanna Jones has accepted her next match up inside the CFA Women’s tournament. This is one interview you don’t want to miss as we will get to know Allanna, why she started fighting, being a part of the CFA tournament, and what it will mean to win the belt. You know with as much attention the Fallon Fox situation has recieved we will talk about her decision to take the fight, Fallon as an opponent, and if she agrees on Fallon fighting women. Follow Allanna on twitter @handsofstones_1 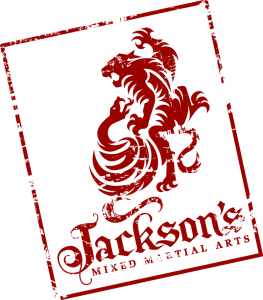 Mike Valle opens up the second hour of the show and if you aren’t in the know of who Mike is you will after this show. Mike is the striking coach at Jackson’s MMA. We will talk to him about working with some of the sports biggest names, working for such a high profile gym, and of course last nights fight. There is plenty to talk about when you have a coach of this level on and I am sure you will end up leaving with a good gym story or two. Tune in and of course phone lines will be open for this whole interview if you have questions for Coach Mike Valle, of course get over to twitter and follow him Valle_Flow 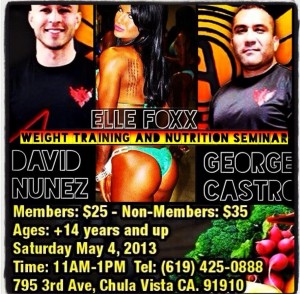 Our last guest is another Coach and one who has been on the show a few times. George Castro of Alliance MMA is stopping into the show and you know we will talk the recent success of the guys he works with, to managing so many different personalities, and how he helps his athletes cope when the fight doesn’t go as it was hoped to. George is also stopping in to talk his current seminar that will be happening at Alliance in Chula Vista on May 4th. If you are in the area I would suggest stopping by to check it out as you will leave with plenty of knowledge you didn’t have walking into the door. Follow George on Twitter @GeorgeCastroMMA