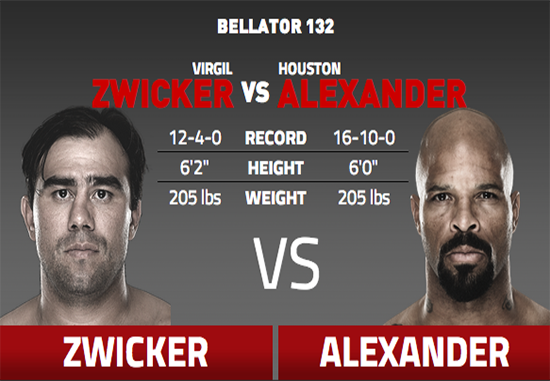 In a night full of finishes, Houston Alexander and Virgil Zwicker fought for the full fifteen minutes and put on an exciting bout.

After a close first round, Zwicker was the first man to convincingly gain momentum on the main card. Alexander was caught off guard with an uppercut at the beginning of the second and it sent him straight to the canvas. Zwicker let him back up, but sent him back down after he landed a knee and a takedown. Alexander was eventually able to make it back to his feet and land a takedown of his own, but his ground and pound was harmless.

Zwicker fought a smart final round as he claimed the center of the cage and dictated where the fight went. He got cracked with a few punches, but Alexander took the worst of it as he ate some serious shots in the final seconds of the fight. There were a couple times in the third round where it looked like Alexander was fighting on instincts as his eyes were glazed over, but he made it to the final horn.

It was odd to see one of the judges give all three rounds to Alexander, but lucky for Zwicker the remaining judges scored the fight in his favor. Zwicker picked up a win in his home town!