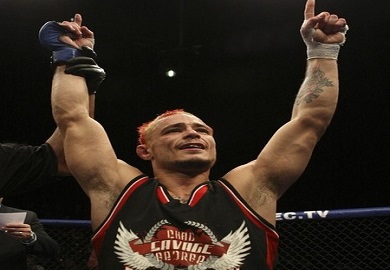 I recently did an interview with Chad “Savage” George on his renowned documentary Occupation Fighter, his injury, and his return to Mixed Martial Arts competition. Chad’s responses are italicized.

“How did Occupation Fighter Start”

“It was a random thing actually, I moved into a new apartment with my girlfriend and my neighbor was a documentary filmmaker and he didn’t know about MMA, but he wanted to learn and thought it would be a great idea for a story, so we went forward with the idea you know, and that was that.”

“I’ve been following your Facebook updates on your surgery, and I saw in occupation fighter that you were with your chiropractor, how did that injury originally occur?”

“Well originally the injury occurred and that kind of led into the surgery, I blew out my disk 3 years ago, and I’ve been doing rehab and stuff like that but all that’s doing is maintaining it from getting worse, and then in November I decided to go through with surgery. The one thing we didn’t really talk about or show in occupation fighter is the cortisone shots I had to get. I was getting cortisone shots just to get through training camp.”

“How’s rehab going? I saw through Facebook that you started light lifting now.”

“It’s not actually light lifting, its strength exercises in my legs, which you know has been great, the last 5 weeks have been nothing, and the rehab team at AFP has done deep muscle work and strength training.”

“Another thing I had seen in Occupation Fighter that was interesting was your art, I’ve seen through Facebook you’re doing more of that since the surgery, do you have any new art shows planned?”

“No I don’t have any shows planned but this has been a cool time because I had so much time on my hands, and its been years since I’ve had that kind of time between my training and coaching other guys in the gym I don’t get that kind of free time.”

“You mentioned coaching other guy’s in the gym, since the surgery have you been doing that more?”

“Yeah I’m coaching these guys for their fights, we’ve had a lot of guys fighting lately, 3 pros recently and 2 amateur guys in Los Angeles tonight! I’m actually heading out to the weigh-ins for that in a bit, and then we have one more in a few weeks.”

“I know that with the back surgery that’s a long term return but when do you hope to be back in action?”

“The tentative timeline for fighting is in October as long as everything goes well, I don’t have any shows set or anything because I don’t want to put pressure on myself, for me it’s a second chance in my career and I’m fortunate enough to get a second chance and I’m going to come back stronger, so I have to be methodical about it. Right now I just want to focus on healing up.”

“Do you have any particular event you’d like to make your comeback in? Any shows or opponents in mind?”

“I definitely want to comeback in Los Angeles, my training partners and my family is in LA, I don’t want it to be anywhere else, I want it to be here, but there aren’t really any shows in LA I’, think about doing, When I’m ready my management will be taking on that.”

“You had wanted to tryout for April’s season of TUF, Bellator just announced their new show that is similar to TUF called Fight Master, would you be interested in doing that?”

“Maybe, I’m looking at what’s out there, the goal is to be the world champion in the UFC, but Bellator is making a great name for their-selves. I’m firstly focused on my recovery. This is the first time I haven’t had pain in my legs, it’s amazing.”

“When do you hope to be back in the gym, not full time, but light training?”

“You know I actually asked that today *laughs* and they [the rehab team] said ‘when we say so’. I want to ease into training, we’ll pick up rehab, three times a week, I’m starting to do things I haven’t done properly, you know my body has been compensating for that disk, and I was only firing at 60-70%, so when I come back it will be a much more explosive me.”

“If you were only firing at 60-70% that will be an unbelievably explosive you, I’d be afraid to be in the cage with that explosive of a you”

“That’s what makes me so excited, it’s a brand new page in my career! It’s like a rebirth in a way.”

“That’s amazing you know, and I think that’s the difference between you and other fighters, you have that determination to make it happen.”

“Absolutely man, I’m motivated, I know technically I’m there if not above some if not many of these guys. My whole thing is I knew there was something wrong, not just the injury, my legs and my core have been so weak over the years, and that’s what the issue was. I’ve been competing at such a high level, and I’ve been competing on broken cylinders!”

“That’s unbelievable, going back to your rehab, what is that like? Walk me through a session of rehab”

“Well I’m actually going to 3 different places, I’ve been doing rehab 3-5 times a week, I have the hands on part and then the deep tissue and we’re making it through. I’m doing a lot of tissue work, reconstructing the muscles that are being used. Basically my body has muscles it hasn’t been using that have been left behind. In Orange Country I’m doing neck, body, thighs in rehab and the Dr.’s specialists are getting my body up to the next level. You know I’ve been in this almost a decade and i’m just now getting into my prime!”

“Going back to your surgery what exactly did they do? Was that on the disk you injured?”

“Yeah they shaved the disk down, the Dr. actually talked about it on the vlog on youtube, they shaved it down and injected stem cells in the disk trying to regenerate the fluid in it, they’re trying to let the body naturally recreate that fluid with the help of the stem cells.”

“How long does something like that take? What is the timeline for your body recreating those stem cells?”

“Well Stem Cells are still so experimental its very risky ,the idea is it’s going to help you, the Dr. that did the surgery is one of the only Dr.’s in the country that does a procedure like this, it’s amazing. I have friends who had the same surgery and they were laid up for weeks and I bounced right back! I felt like I could train two days after the surgery, and maybe it’s mental but it’s definitely something good. I’m feeling great and it’s exciting. People don’t realize the biggest fights in my career I couldn’t do strength training besides push-ups and pull-ups, I look at it now like ‘that’s ridiculous. I have a fire in me that I haven’t had my whole career, that’s what motivates me right now.”

“You said the Dr. that did your surgery is one of the few Dr.’s that does this kind of surgery, how did you meet him?”

“Well he’s an LA based Dr. with the spine institute, Dr. Justin Paquette, we met and talked and I had actually seen a few other surgeons and when I met with him it was one of those things that just seemed too good to be true, so I did my research and decided he was the right guy, and I actually built a friendship with him. I couldn’t be happier moving forward with him, it still blows my mind that I’ve gone through it at this age.”

“Yeah I agree, when Tito Ortiz had his neck surgery he was much older and further along in his career so for you to have gone through this at your age is tough.”

“I lucked out in that I never had too many injuries aside from broken fingers and toes, I had never had anything happen to me, I guess being in the sport for so long I was overdue.”

“As far as the rehab team goes is that something you will stick with after your rehab is done?”

“Your last fight was in May, how long after that fight did you decide to go through with the surgery.”

“Well I did the surgery in February, it was bad during that fight, I had a cortisone shot the week of the fight just to go in there, but the cortisone shots were staying in my system less and less, and November was Jiu-Jitsu Worlds, and the cortisone shots didn’t work so they did an epidermal. My body had built an immunity to the cortisone where they would only last a day and then all the pain would come back. After worlds my body locked up on me, I couldn’t walk, couldn’t extend my back, and I just decided enough is enough let’s get serious about this. After the worlds up until January we decided we’re going to get serious therapy, and do a month of hard therapy and if there was no success we’re doing surgery. I had a choice, do I keep doing therapy and stop fighting? All we were doing with therapy was preventing it from getting worse, or do the surgery and take a second chance at my career. Everyone that works toward something, it’ll come back to you, it’s finally coming back to me, and it’s paying dividends. I look at it worst case scenario, I mean worst case scenario, we start training, something isn’t feeling right, my body is rejecting whatever, look I’ve had a great career, and I’ve had lots of good things, God forbid I can’t fight, I don’t plan that whatsoever, I’m just saying hypothetically I can coach pain free, anything past this is a bonus.”

“That’s about all I have to ask, I’ll let you head over to weigh-ins, I wish you nothing but the best man, I feel like 2013 is going to be your year. Thank’s for your time in doing this interview, I really appreciate it.”

“Sounds like it! Can’t wait to see you get back in there and fight, best of luck with rehab, and good luck to your guys tonight that’re fighting, and again thank you for your time and for doing this interview.”

We here at BJPENN.com wish Chad a speedy recovery and hope to see him back in action soon.