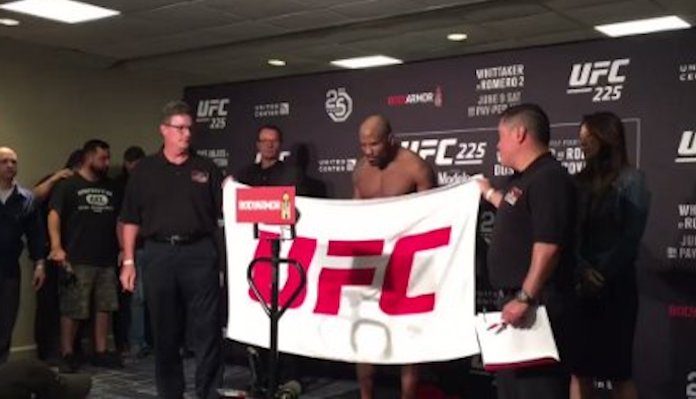 Almost two hours later, Romero took to the scale for a second time, and unfortunately, he once again missed, tipping the scales at 185.2 pounds — just 0.2 above the mark. He will not be given another chance to weigh in, per the rules of the commission in Illinois.

As MMAjunkie’s Mike Bohn points out, Romero is now the first fighter in UFC history to miss weight for multiple title fights.

As of now, it is not known whether Romero’s fight with Whittaker will go ahead. It’s worth noting that Whittaker has previously stated he will not take the fight if Romero misses weight.

Robert Whittaker originally said he wouldn't fight Yoel Romero at #UFC225 if he missed weight. After arriving in Chicago he changed his tune and said he didn't come all the way from Australia not to fight. Now that it's reality, we'll see how this shakes out.

If Whittaker does accept the fight, Romero will not be eligible for the middleweight championship. He is also likely to surrender a significant portion of his purse to Whittaker.

Stay tuned for further updates on this upsetting Yoel Romero situation as they emerge.