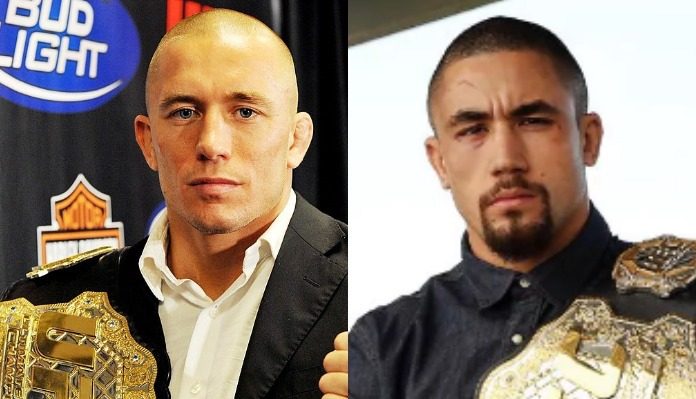 In the opinion of former UFC welterweight and middleweight champion Georges St-Pierre, current UFC middleweight Robert Whittaker is the perfect ambassador for the sport of MMA. The Canadian MMA legend gave his take on the Australian champion in an interview with the Sydney Morning Herald.

“He’s a great example and a perfect role model for the sport of mixed martial arts – and you cannot have a better ambassador for the sport,” St-Pierre said. “You guys have the dream guy coming from Australia to represent you.”

St-Pierre has trained with Whittaker in the past, and will be pulling for him when he steps into the cage to rematch fearsome challenger Yoel Romero in the main event of UFC 225 on Saturday night.

“Robert Whittaker, for me, he’s someone that I’ve trained with in the past – he’s a nice guy, and I wish him the best of luck this weekend. I’ll be cheering for him.”

St-Pierre is not only pulling for Whittaker, however. He also expects him to leave Chicago with the belt still wrapped firmly around his waist.

“I think if Whittaker sticks to what he does – stick and move, keep moving – it’s very hard to gauge him.

“The key to victory will be movement. Hit and run, hurt him every time he comes. Make your opponent uncomfortable. By doing that, you’ll empty [Romero’s] gas tank very fast.”

Needless to say, Georges St-Pierre is a big fan of Robert Whittaker. Interestingly, the pair’s paths almost crossed, when St-Pierre captured the UFC middleweight title from Michael Bisping in December of 2017. At the time, Whittaker still owned the UFC interim middleweight title. In the end, however, St-Pierre vacated his belt, which meant that Whittaker was promoted to undisputed champion.