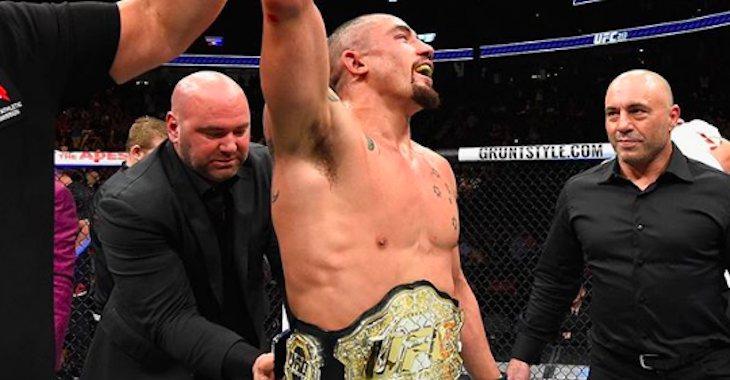 “The Soldier of God” and “Bobby Knuckles” met previously at UFC 213 with Whittaker emerging victorious by way of unanimous judges decision.

Round three begins and both men fire off left hands. Romero lands a right hand that drops Whittaker. Yoel is all over him now with punches in bunches. Whittaker scrambles to his feet. Romero lands an uppercut. Whittaker fires back withan uppercut and then a left hand. Romero comes back with punches to the body. He has Whittaker pressed against the cage. Romero with shots to the body again. Whittaker fires off a left hand. They continue to battle against the cage. Romero pushes off and then fires off a left and a uppercut. He continues to press the action. Whittaker is in all sorts of trouble. Romero with punches in bunches. Whittaker turns and runs. Yoel continues to hunt but Whittaker lands a head kick. Romero charges forward like a zombie. He lands a left hand and then grabs a hold of Robert. He drags Whittaker to the floor but Robert gets right back up. The fighters clinch along the cage. The horn sounds to end round three.

Round four begins and Whittaker lands a hard front leg low kick. Romero retreats and Whittaker comes in with another. Yoel is rocked with a partially blocked head kick from Robert. Whittaker moves in but Yoel remains composed. Robert lands a kick to the groin of Romero and Yoel turns in discomfort. The referee steps in and stops the action. Romero is given time to recover and we restart. Romero comes forward and Robert greets him with a high kick which is blocked. Whittaker with a pair of jabs and then another. Romero lands a nice counter left. Whittaker returns fire with a low kick. Yoel lands one of his own. Romero with a nice jab. Whittaker’s nose is bleeding now. Robert with a front kick to the body. He lands a left hook and then a jab to the midsection of Whittaker. Robert Whittaker throws what appears to be an injured right hand. He paws with his left jab. Romero comes forward with a right hand. He follows that up with a jab. Yoel with a nice low kick. Whittaker fires off one of his own. Whittaker with a kick and Romero lands a left hook. That wobbles Robert. Romero lands another big shot. Whittaker is in all sorts of trouble but the horn sounds to end round four.

Round five begins and Romero lands a nice combination. Whittaker fires back with a left. The Cuban continues to walk forward but eats a crisp jab from Whittaker. Romero with a nice counter left hook. He lands a huge right hand that floors Whittaker. Romero with some huge ground and pound now. Whittaker scrambles and forces his way back to his feet. He shoots in for a takedown but Romero is all over him. Back on the feet now and Romero lands an elbow and then a trip. He takes Whittaker’s back. He lands a knee to the liver. Whittaker stands up and is a bloody mess. Romero with a knee to the back of the thigh. Romero is searching for a trip now. The referee steps in and we are back to standing. Yoel leaps in with a combination. Robert with a kick to the body. He throws a head kick that misses.