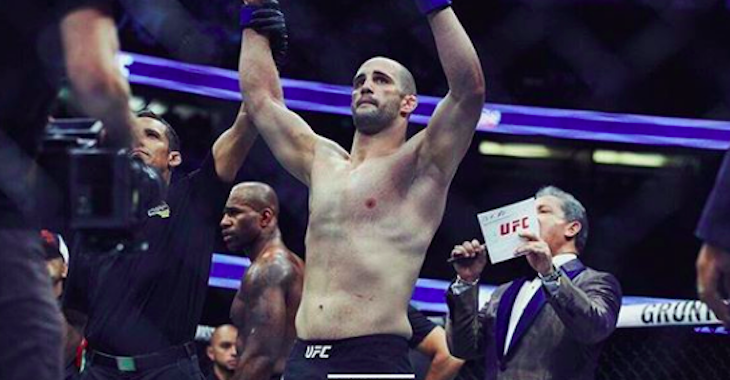 Shortly after it was announced that Jon Jones had failed a drug test in the lead up to his UFC 214 defeat of Daniel Cormier, the fight was ruled a no contest, and Cormier was reinstated as the UFC light heavyweight champion. From there, Cormier took a few days to process this hectic turn of events. Eventually, however, the reinstated champion set his sights on his next challenge, and this time around, he let the fans decide. Apparently, the fans decided on Switzerland’s Volkan Oezdemir, who burst into title contention with a decision defeat of Ovince Saint Preux and pair of blitzkrieg knockouts of Misha Cirkunov and Jimi Manuwa.

Once the fans had spoken, Cormier offered the title shot to Oezdemir, and the Swiss knockout artist quickly accepted.

@dc_mma you are a real champ! I’m glad they chose me. Fans are always right ! #fromnowheretothebelt #history #notime #blessed&honored pic.twitter.com/eo7UNw1eMJ

On Monday’s edition of The MMA Hour, Volkan Oezdemir was asked for a prediction for his potential scrap with Cormier. Perhaps unsurprisingly, he believes he can finish the champ in No Time at all. Less than two minutes to be exact.

“I think in the first two minutes,” Oezdemir said. “This is my goal anyway, so I’m going to make all my training so I’ll be able to knock him out really fast.”

What do you think will happen when the champ Daniel Cormier and challenger Volkan Oezdemir are locked in the Octagon together? Can Oezdemir deliver on this prediction? Join the debate in the comments section!